Courtesy of the BFSFA committee, here are all of the provisional results from today’s programme of Sunday football action. The tables, fixtures and results have now been updated. If in doubt, please call Dennis on 391055. Midweek evening fixtures continue on Wednesday.

Today, Fleetwood Town FC hosted two of the BFSFA’s Divisional Cup finals and what a great job they did of it.  In the first match, Teamsport 90 FC beat fellow Division 2 side Devonshire Arms FC 1-0.  It was a close match.  Teamsport scored early doors and although Devonshire did their level best to try and get back into it they just could not score thanks to a combination of great defending and a poor choice of final ball.  Good to see Teamsport 90 FC win something after all the years of trying – well done to them.  In this afternoon’s Prem/Division 1 ‘Melling’ Final between Poulton and Additions it was Additions that came out on top with a 4-3 win that in some way made up for missing out on the Premier Division title.

On Wednesday night, Blackhurst Budd FC all but secured the Division 1 title but they made absolutely sure this morning as they beat Northern Care Colts FC 13-2.  The Colts still suffering a collective hangover no doubt after Friday night’s Gledhill Final.  It looks very much as though Sportsworld Media FC have given up on trying to secure runners up spot.  They struggled to get a side out this morning and went on to lose 4-2 at home to CTK FC who are finishing the season strongly.

Two games into Division 2.  Marton failed to show against Mereside who were handed a 1-0 win.  At Squires Gate, Xceptional Kitchens lost 3-2 to Station Tavern.  In Division 3, it loooks as though Clifton Rangers FC will be crowned Champions after they won 4-0 away at Kirkham Con Club whilst rivals Frenchman’s Cove could only draw 1-1 at home to FC Kingsfield.  Clifton are now six points clear of Frenchies who, despite having two games left to play have an inferior goal difference but who knows?  Two decent sized wins may be enough for the Cove. 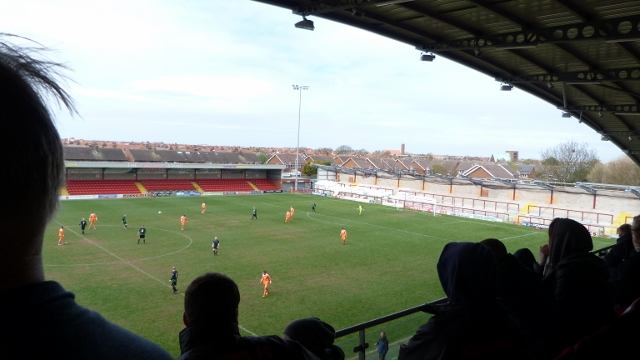 Action from Highbury Avenue, the ground of Fleetwood Town FC that today hosted two Divisional Cup finals.  In the above picture, Teamsport 90 FC were playing the Devonshire Arms FC in the Division 2/3 Final 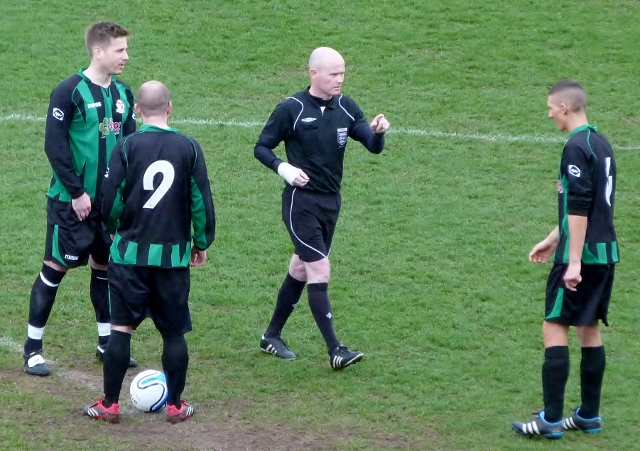 Kick off – Teamsport 90 FC in the green and black

A great gesture from Fleetwood Town FC as all spectators had use of the sponsors lounge and upper balcony to watch the match.  Many thanks to FTFC and Martin Booker for providing an excellent experience for supporters and players alike 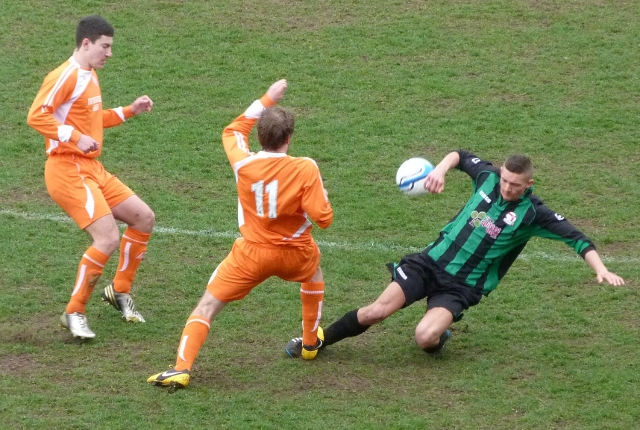 Ouch! – right on the ankle 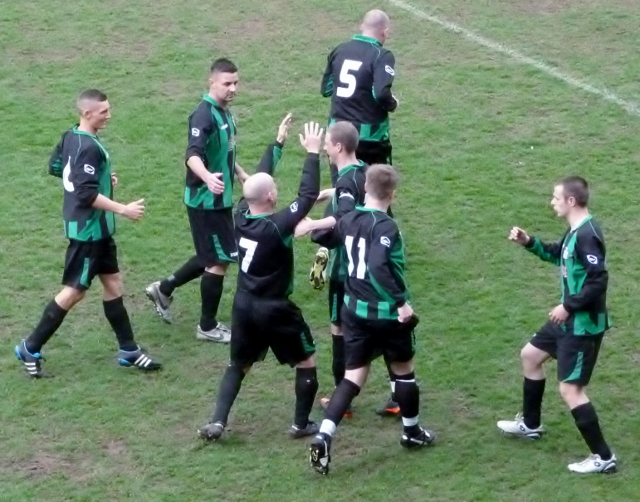 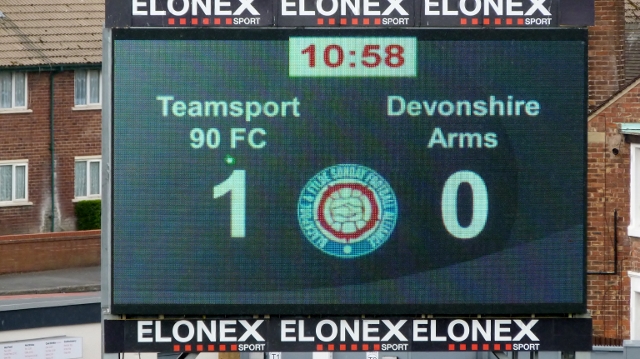 Probably the only Sunday football game to have a full electronic scoreboard in operation? 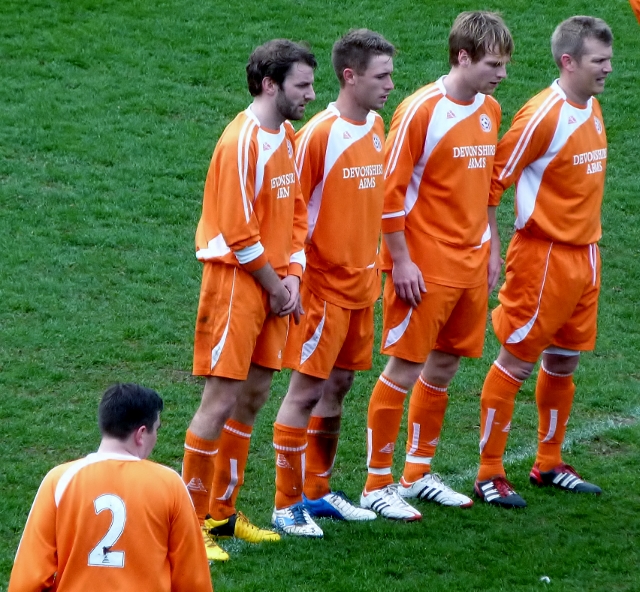 The Devonshire Arms FC prepare to defend a free kick 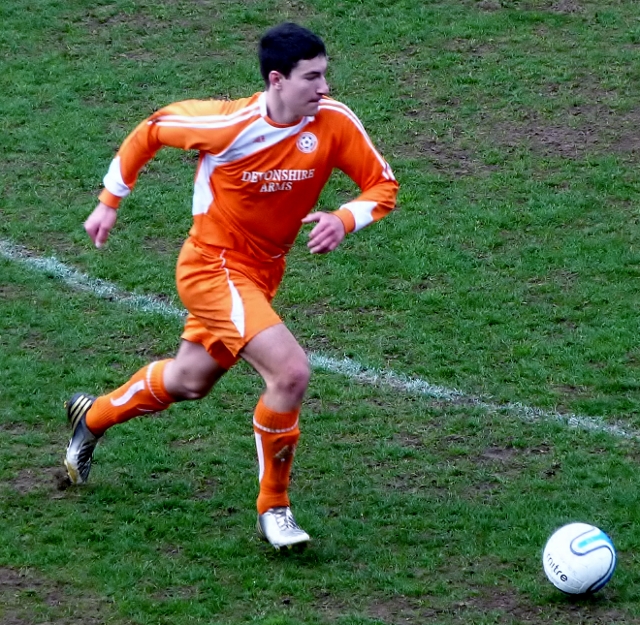 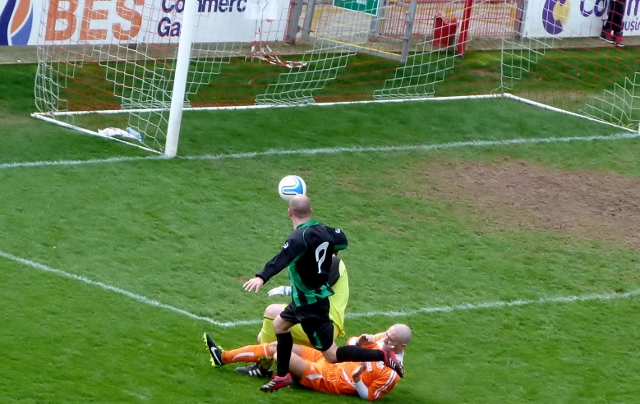 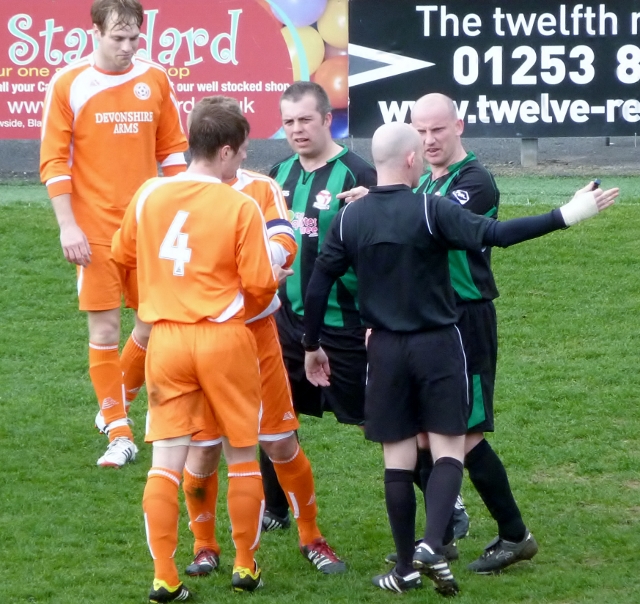 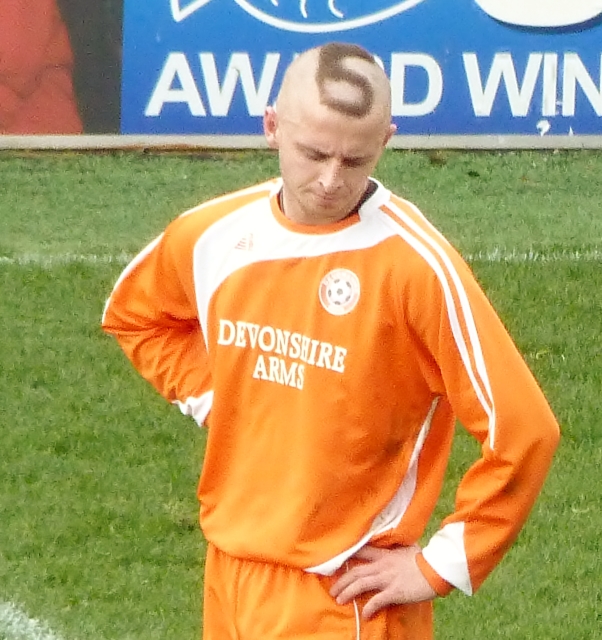 When getting booked, he’s not asked to turn around and show his team number – just dip yer head son – No 6 cheers 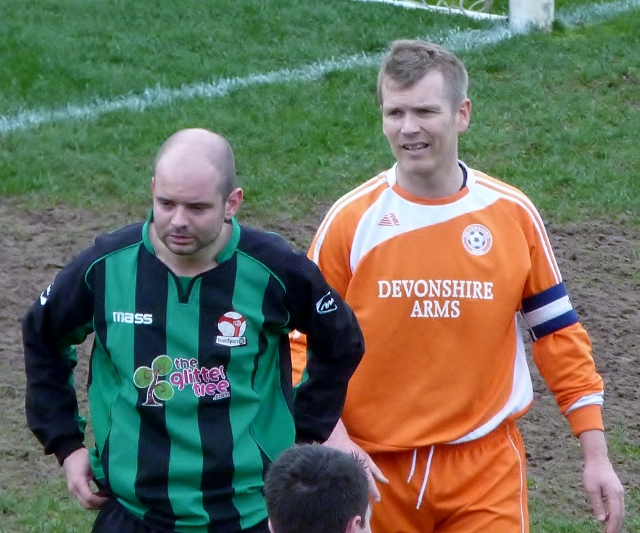 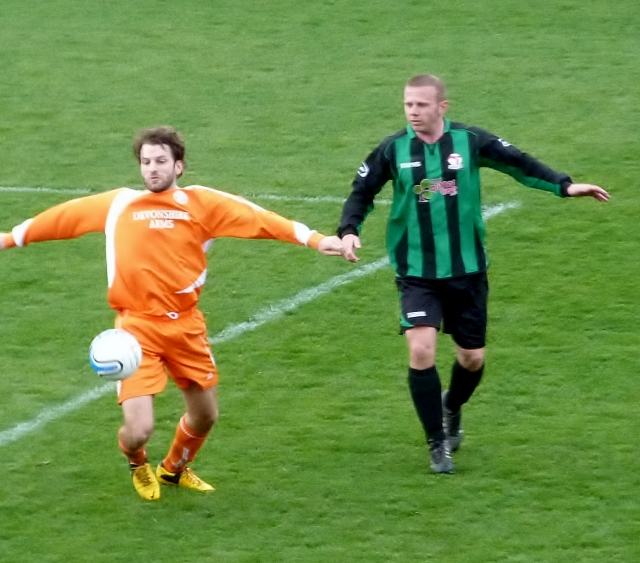 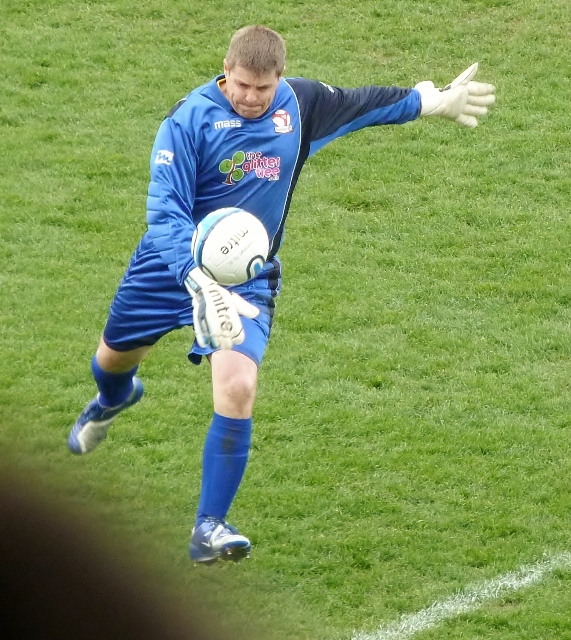 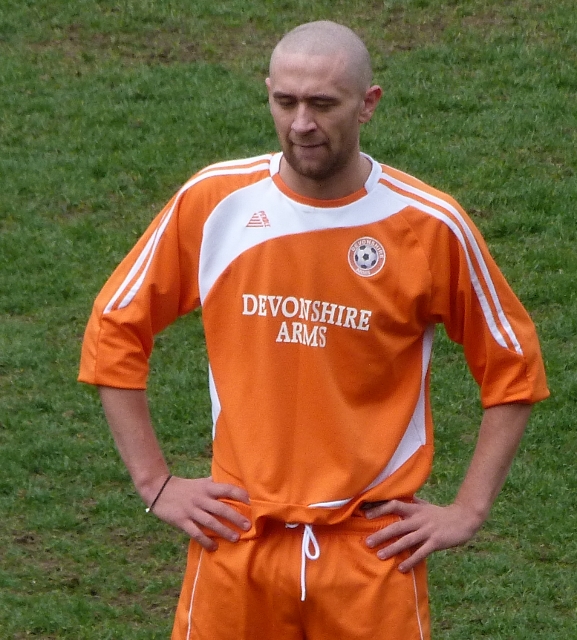 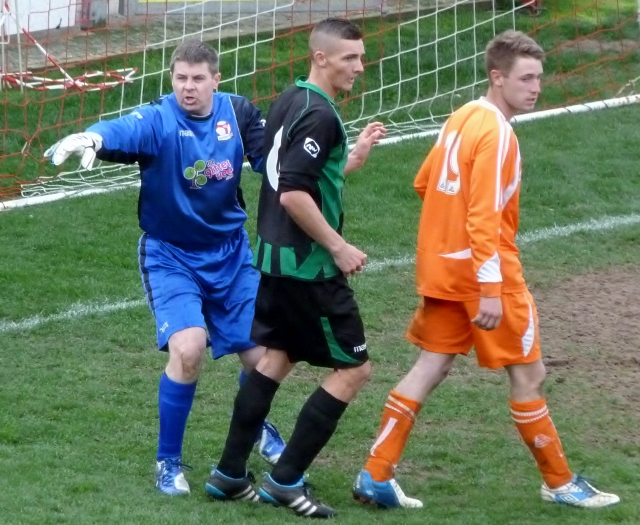 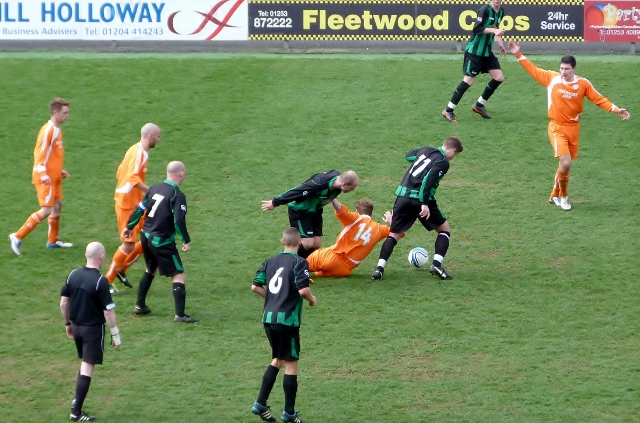 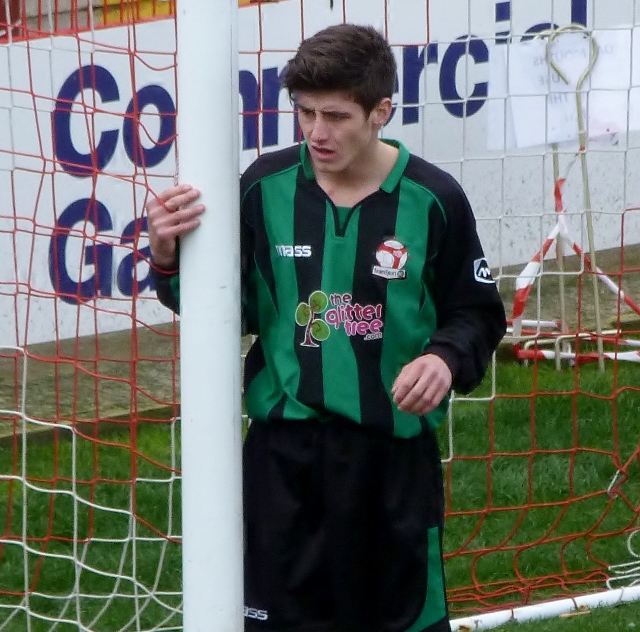 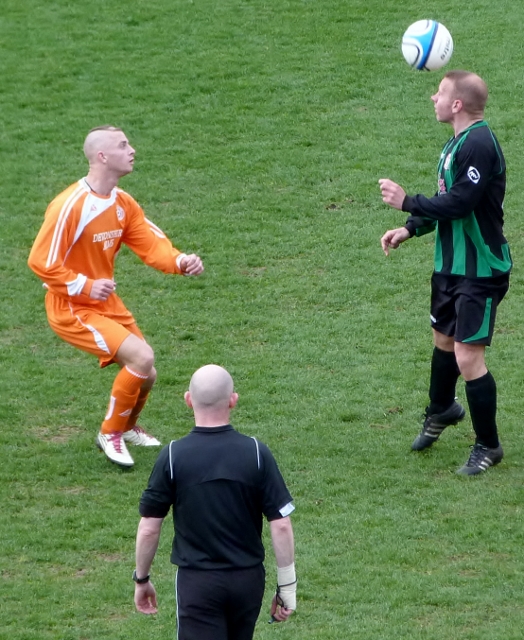 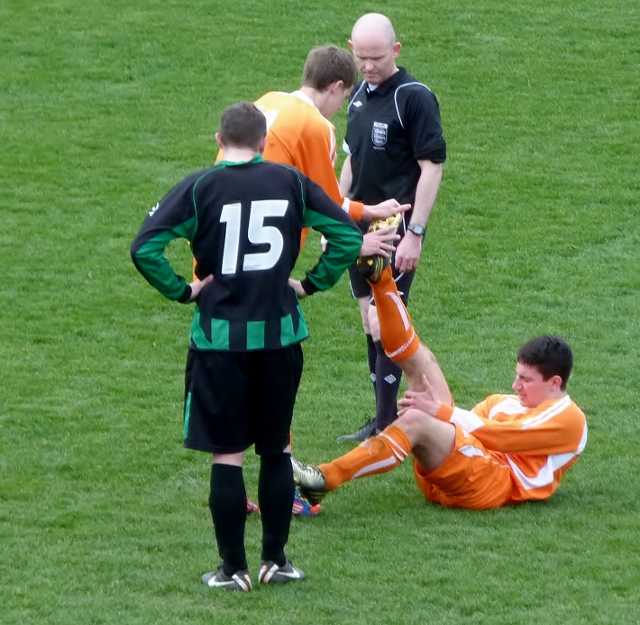 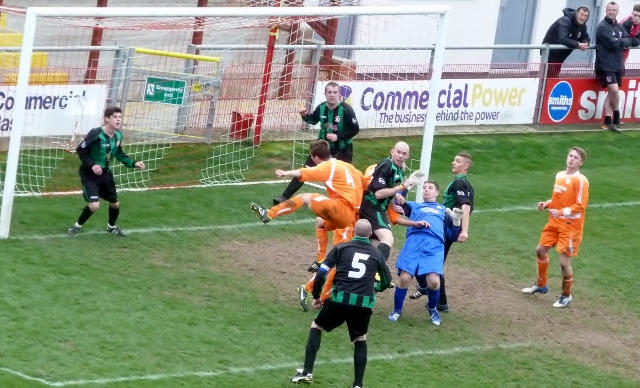 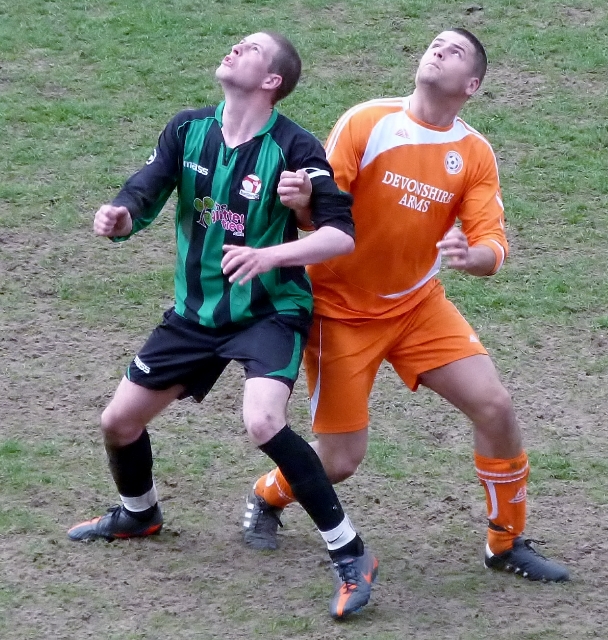 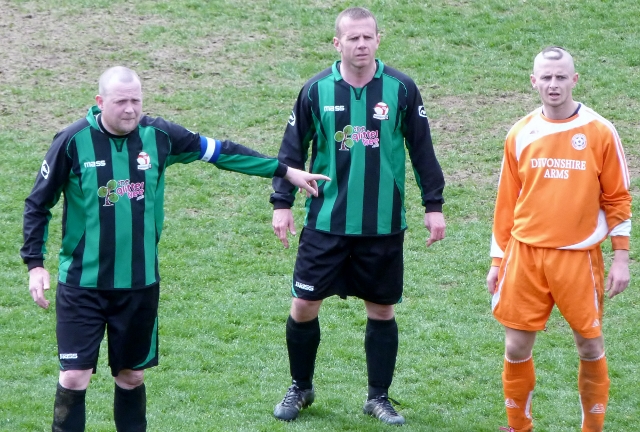 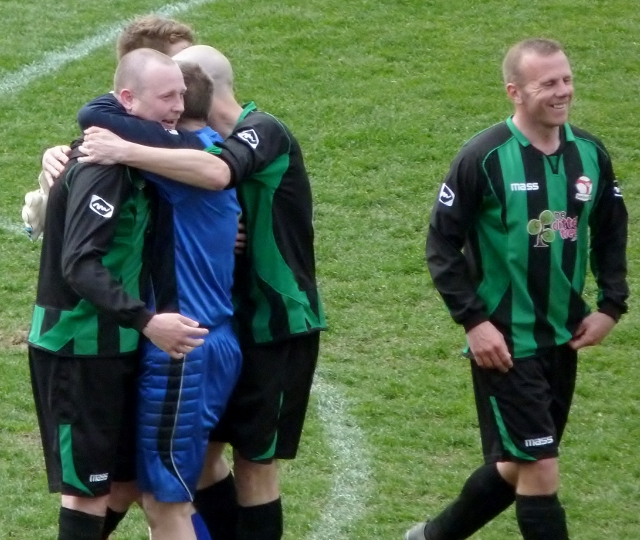