This Friday evening sees the 46th  playing of the Gledhill Cup Final (7pm KO).  The match will take place at Bloomfield Road, the home of Championship club Blackpool FC.  Unusually, the game will feature two non Premier Division sides in the shape of Division 1 team Northern Care Colts FC who will take on Division 2’s Northern Rags FC.  Please try and get down there to support the BFSFA’s showpiece final.  It promises to be a close and exciting contest.  Here’s a quick review of this season’s competition.  (Now updated to include pictures of the final plus match summary).

Friday night sees the 46th playing of the Gledhill Cup final and this one has had many reaching for the record books as it’s thought to be the first final not to feature a team from the top flight.  Division 1 side Northern Care Colts FC will play Division 2’s Northern Rags FC at Bloomfield Road, the home of Championship side Blackpool FC.

This season’s competition got underway back on September 16th.  There were few surprises but Division 2 team Blue Room FC took Division 1 high flyers Golden Eagle FC to penalties after drawing 2-2.  Back in September Mythop Leisure FC were in their best form as they beat FC Rangers 10-1.  Northern Care Colts FC faced a very difficult tie at home to fellow Division 1 team Wrea Green FC but progressed thanks to a 4-3 win.  Northern Rags faced fellow Division 2 side Highfield Social but strolled through to Round 2 with a comfortable 7-1 victory.

Round 2 took place in early October as the Premier Division teams joined the competition but for some, it was to be a short stay.  Division 3 side Bispham Hotel FC saw off Revival Tattoos FC with a 3-2 win whilst Blackpool Catholic Club crashed to a 6-2 defeat at home by Division 1’s Boars Head FC.  In the best looking tie of the round Poulton narrowly beat Blackhurst Budd 1-0.  Northern Care Colts had a much easier time of it as they beat the youngsters of Division 4 newcomers Highlands FC 18-1 whilst Northern Rags knocked out Division 2 side Marton Institute 5-0.

Into early November and sixteen teams fought it out in Round 3.  The Bispham Hotel carried on with their heroics as they knocked out Division 1 team CTK FC 5-4 on penalties after the game had finished 3-3.  Northern Rags made it through to the last eight after facing a difficult tie against Boars Head FC but they managed to win it 6-4.  The Reform Health Club took an unusual early exit as they were beaten 2-1 by Molloys FC.  Sportsworld Media FC progressed thanks to a 5-1 win against Uncle Tom’s Cabin as did Northern Care Colts who beat Lane Ends 3-1.  In the tie of the Round Poulton SFC took on fellow Premier Division team AFC Additions and won 5-2. 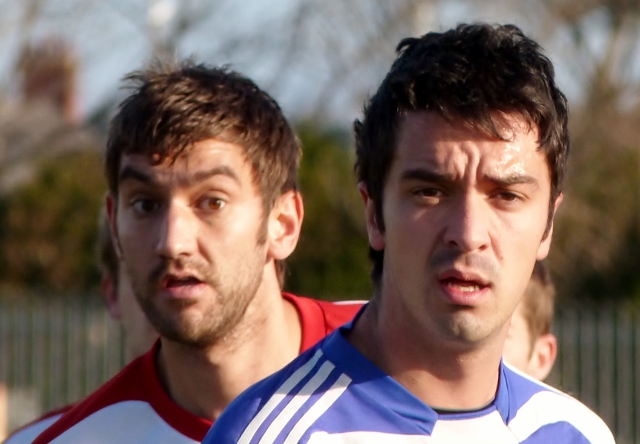 Mid December saw the four Quarter Finals.  The great run in the competition of the Bispham Hotel came to an end as they narrowly lost 2-1 to Northern Rags.  Division 1 side Sportsworld Media upset Premier Division outfit Molloys FC to make it through to semi-finals thanks to a 3-2 win.  Poulton cruised through to yet another Gledhill semi-final after beating Clifton Rangers 6-0 and it was similarly comfortable for Northern Care Colts who ended the run of Division 3 side Frenchman’s Cove FC who did brilliantly to reach the last eight.  5-0 the score in that one. 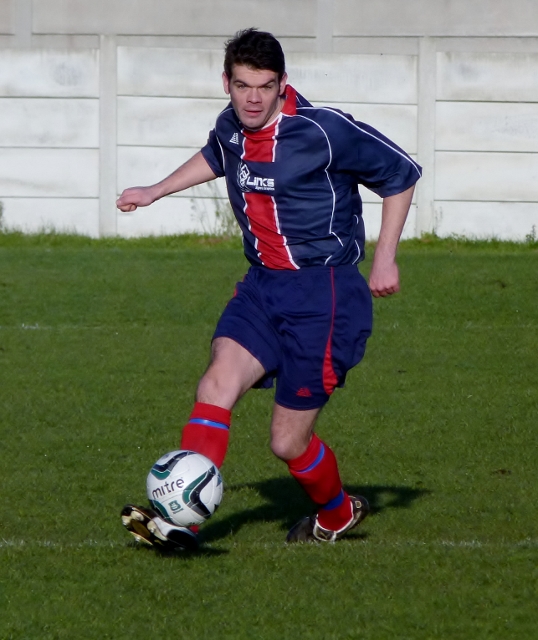 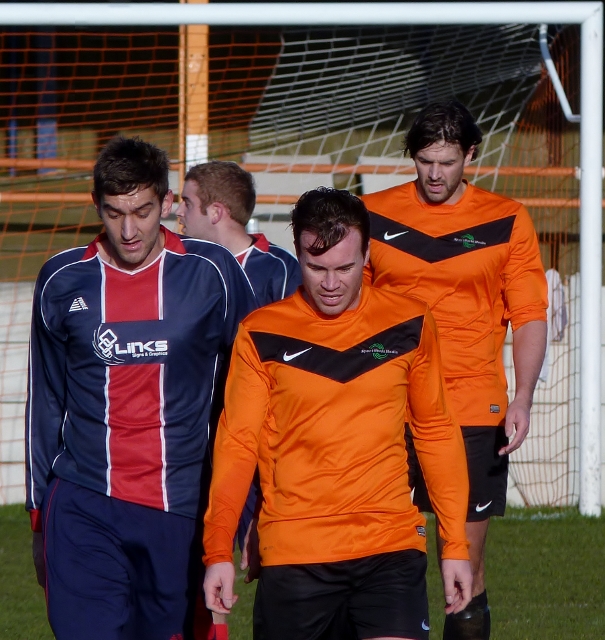 Both semi-finals took place at the ground of AFC Blackpool under the floodlights. In the first of them, Northern Rags FC knocked out higher league opposition once again as they beat Sportsworld Media FC 3-1.  In a repeat of last year’s semi-final, Northern Care Colts FC took revenge as they knocked out strong favourites Poulton SFC thanks to an impressive defensive display as well as an injury time winner.

As of the time of writing, Northern Rags FC were top of Division 2 with a number of games in hand on their nearest rivals.  Northern Care Colts FC are currently seventh in Division 1 needing a strong finish in their last four games to finish in the top six.  This final again promises to be close with no clear favourite.  Either side is well capable of lifting the trophy if they perform collectively on the night.  Wishing the best of luck to both teams.

Finally, it’s also a big game for tonight’s officials who have deservedly been handed the top appointment of the season.  Good luck then to the man in the middle James Taylor who will be ably assisted by Dave Wolfenden and Ben Wiseman with Brian Eccleston as the 4th Official.

It was a cool and breezy evening at Bloomfield Road and the pitch was none too good.  However, it didn’t stop Care’s Rob Edwards hitting a fantastic dipping volley into the far top corner less than two minutes into the match.  Minutes later and Northern Care were 2-0 up thanks to my MOM Paul Eddelstone who gathered a diagonal cross cut inside and fired home.  Towards the end of the first half, Rags finally bucked up but couldn’t penetrate the Care back four.  2-0 at the interval.  Rags equalised straight from the restart and I  thought a comeback may have been on the cardsbut it wasn’t to be as Care regained their two goal advantage thanks to a lob from Rob Edwards following the pass of the match that left him one and one with the keeper.  Paul Bailey scored a late consolation for Rags but in the end Northern Care FC were deserved winners – well done to them. 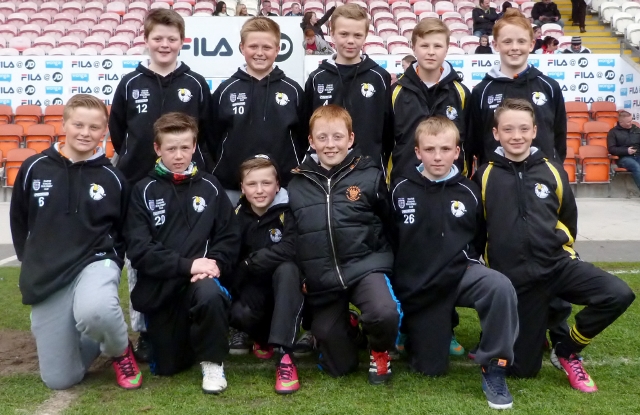 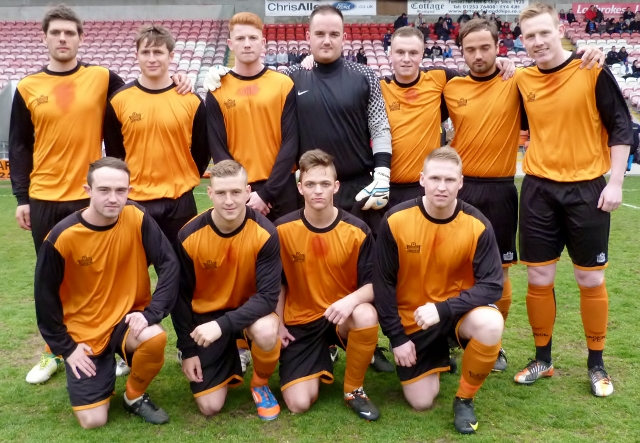 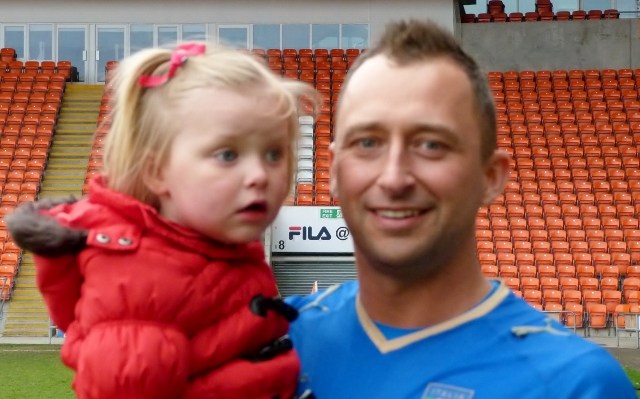 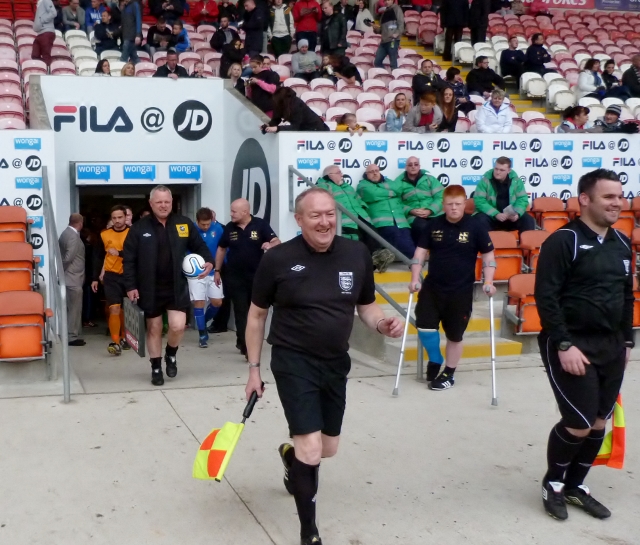 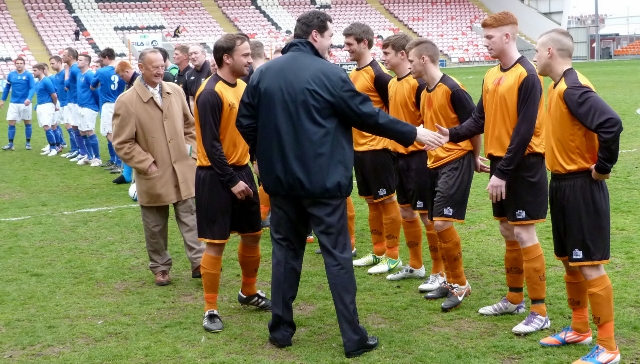 Mr Gledhill is introduced to the two teams 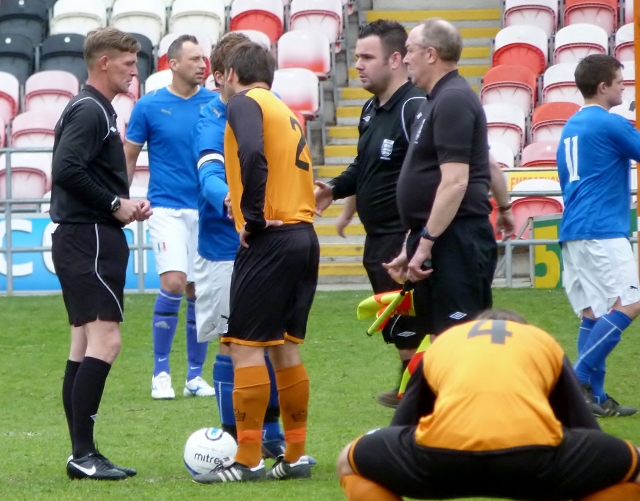 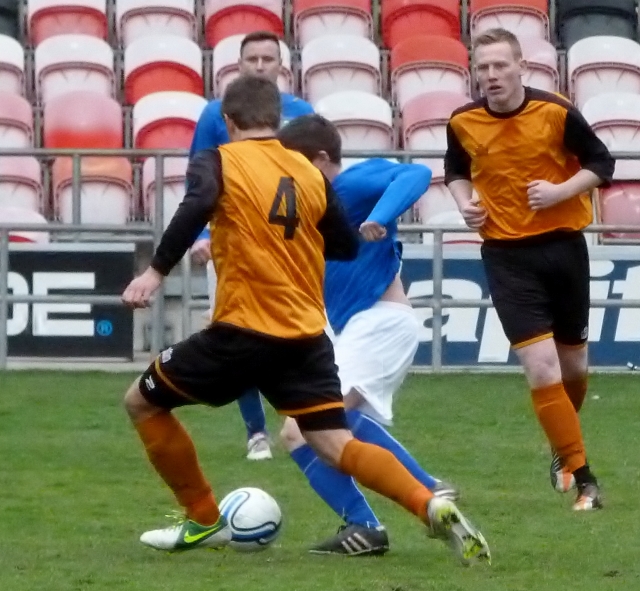 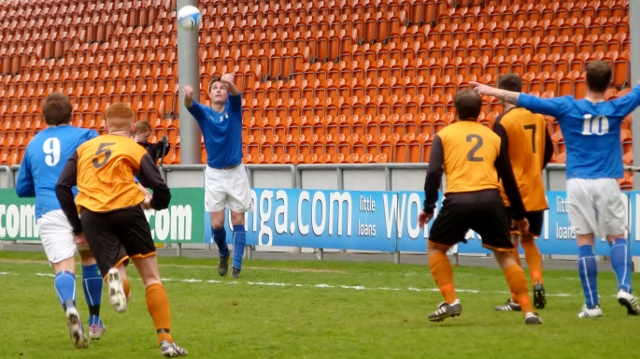 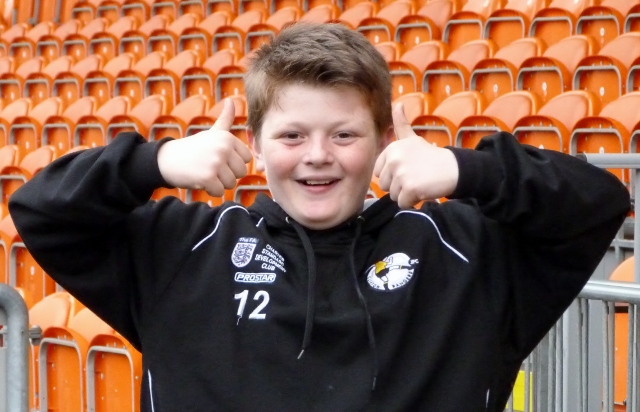 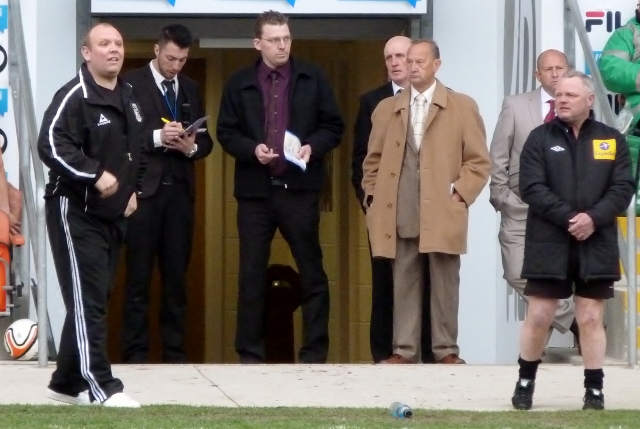 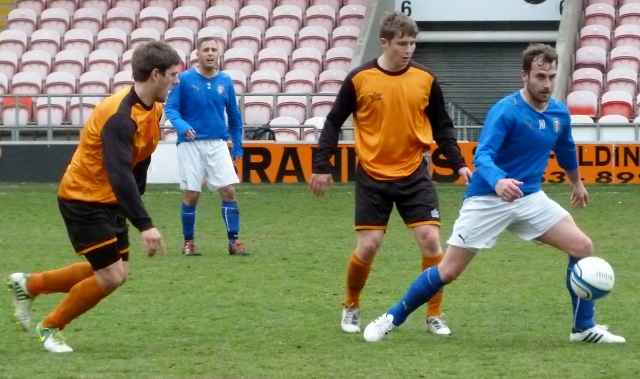 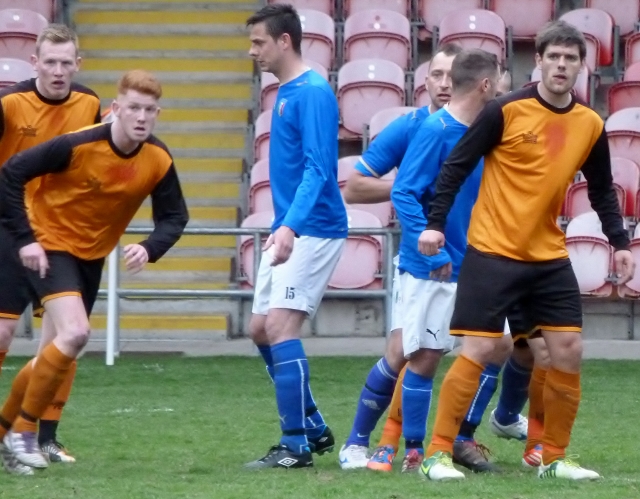 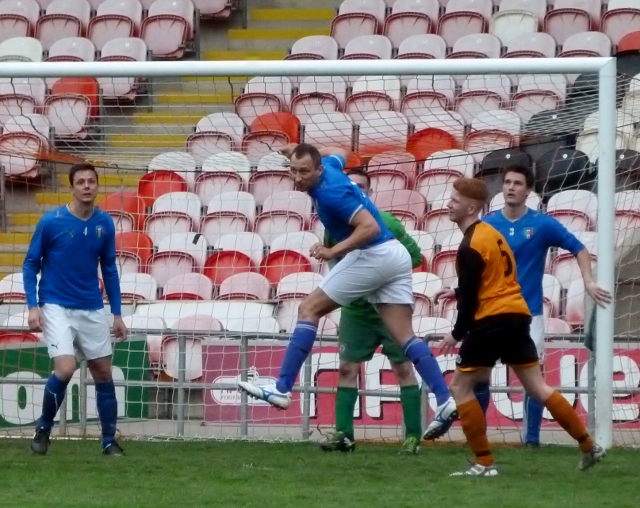 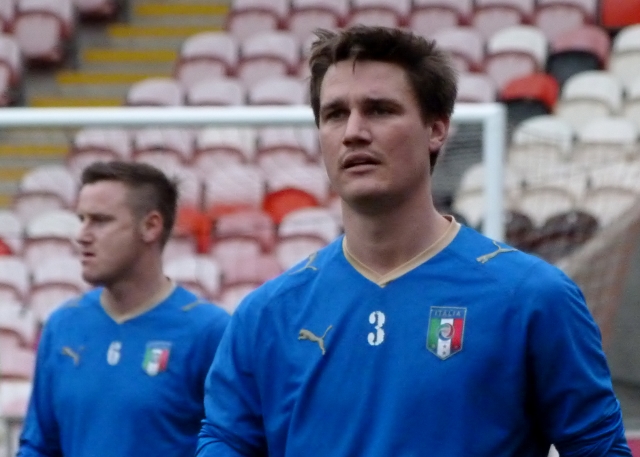 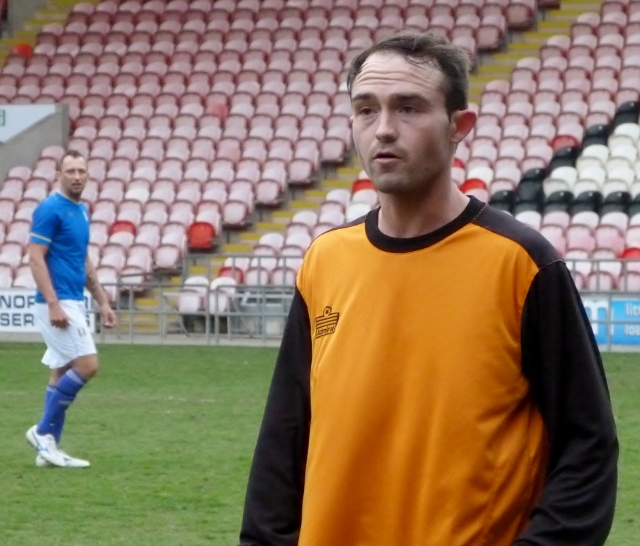 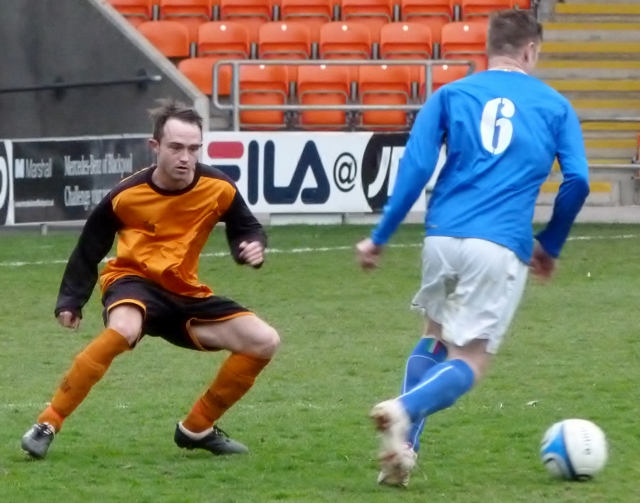 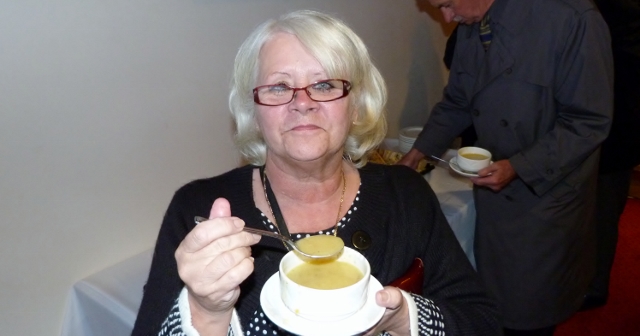 Carol Cox with her soup at half time

The officials collect their medals 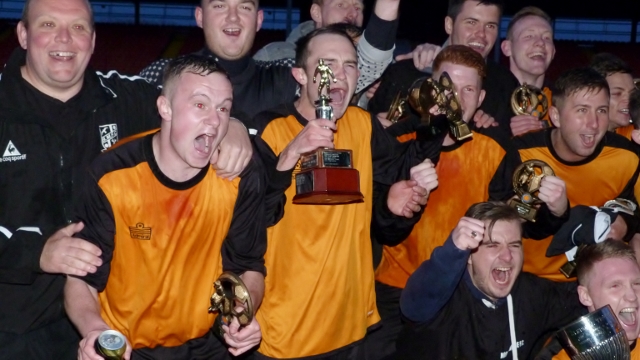 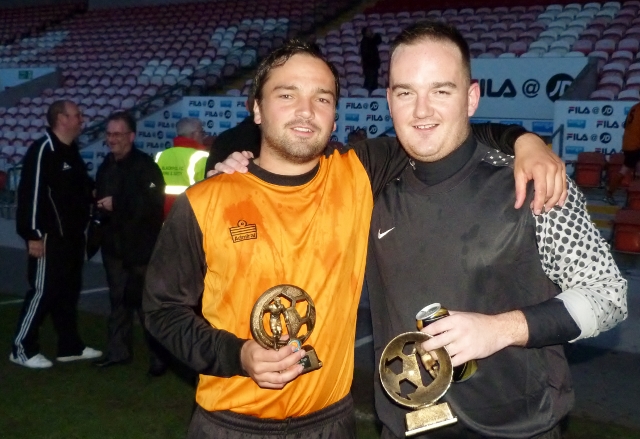