Courtesy of the BFSFA committee, here are all of the provisional results from today’s programme of Sunday football action. The tables, fixtures and results have now been updated. If in doubt, please call Dennis on 391055. Midweek evening fixtures continue on Wednesday.  We also have the Division 4 Cup final on Wednesday night and the Gledhill Cup final on Friday night.

Prior to today's matches, the Division 1 form table over the previous six matches had Blackhurst Budd at the top with 18 from 18 and the Saddle FC in second who had 15 from 18.  Mid table Saddle were finishing the season strongly.  I was looking forward to watching it but the Saddle only turned up with six players so the game didn't go ahead.  Blackhurst will probably be awarded a 1-0 win. Wrea Green's slim chances of catching Blackhurst all but ended as they lost 5-0 to Sportsworld Media who still have a decent chance of taking the title or at least runners up spot.  Golden Eagle FC ended their fine season with a 4-2 win against Bathroom Solutions.  Elsewhere, Norhern Care Colts warmed up for Friday night's Gledhill Cup Final with a 4-3 win against Chris Allen Garages.  CTK FC won 2-1 away at Mythop Leisure FC.

In Division 2, Northern Rags FC all but secured the title thanks to an 8-0 win against FC Rangers.  Only a mathematical miracle can rob them of the prize as their nearest rivals Devonshire Arms are now six points behind with only two games left and a much inferior goal difference.  The Devonshire Arms beat Highfield Social 2-1 this morning to guarantee at least runners up spot.  Teamsport 90 FC beat Uncle Tom's 9-3 and the Blue Room beat Station Tavern 4-2.  Xceptional Kitchens won 3-2 away at Mereside.

The Division 3 title race is now between Clifton Rangers and Frenchman's Cove.  Both won again this morning.  Clifton's 4-0 win against Kirkham Con Club leaves them a point clear at the top but the Cove have a game in hand.  Frenchman's demolished the Bispham Hotel 12-2 this morning as their late season capitulation continued. Wesham ended their season with a 2-0 defeat to FC Kingsfield whilst Normoss Newton won 4-0 away at Marshall Court.

In Division 4, Victoria FC secured runners up spot after they narrowly beat Pump & Truncheon FC 4-3.  Pump & Truncheon finished third.  Champions Wesham Town ended the season with a 5-2 win against Fylde Coast Vets, the latter finishing in a highly respectable 4th position that may put them in danger of promotion. 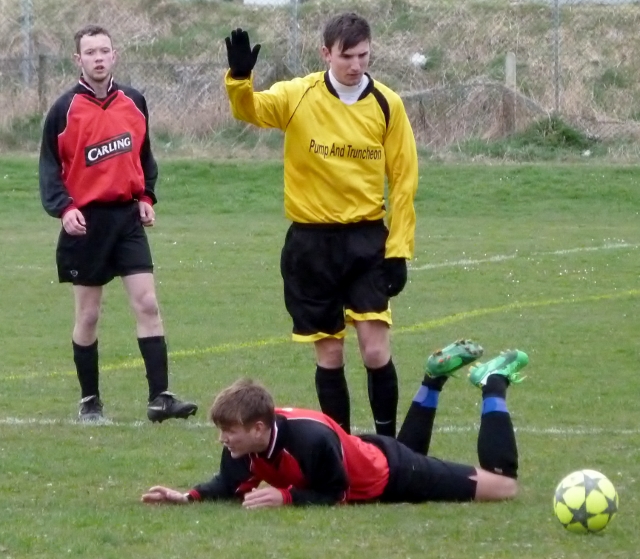 'Sorry – my fault!' – Action from a gale swept Commonedge Road where Division 4 sides Pump & Truncheon FC and Victoria FC (Red) were playing for the runners up spot.  A few more pictures below but not too many – I'm getting soft in my old age. 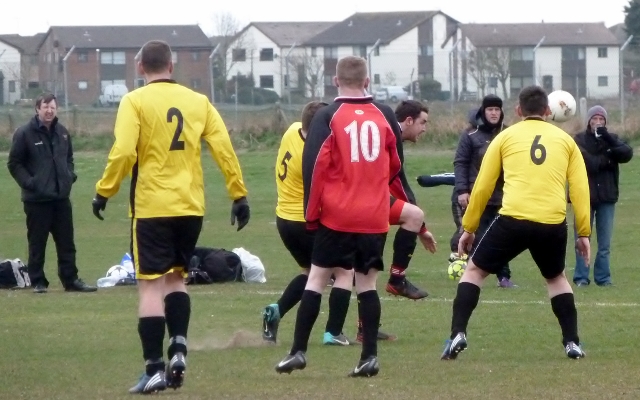 Victoria FC in the red 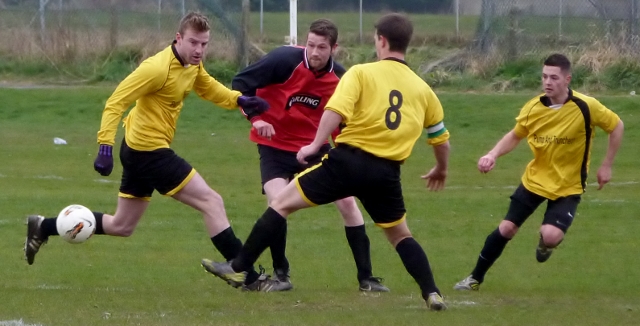 In the distance, freezing supporters shelter from the wind as they watch the Fylde Coast Veterans v Wesham Town game

'Listen love, nip across to the Collins Park fence and collect those balls that have been carried awy by the wind'

Pump & Truncheon FC prepare to defend a corner…..everything looks standard, man on the near post and the attacker closely marked. 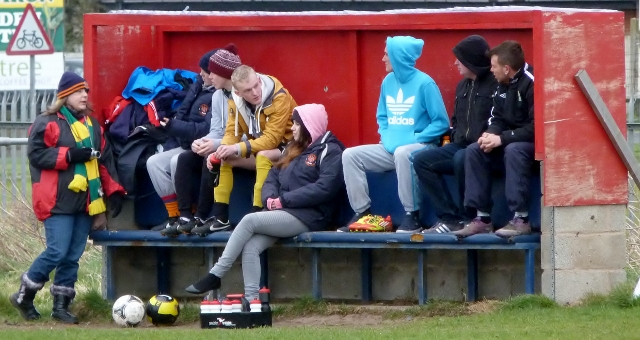 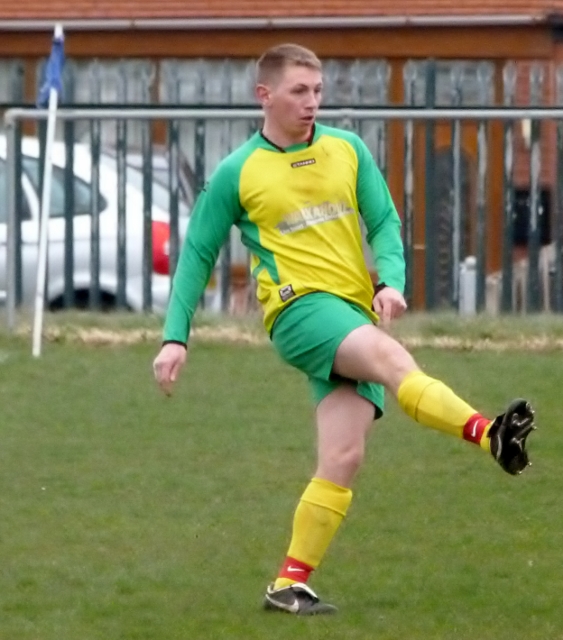 That's enough, back home for a brew