A strong chill wind from the East made things very uncomfortable for Sunday football spectators this morning.  In the last of the Premier/Division 1 Cup ties, AFC Additions had a comfortable 8-0 away win at Mythop Leisure.  They'll face Northern Care Colts in the semi finals.  In the Division 2/3 Cup Teamsport 90 FC reached the semi finals after beating Highfield Social 4-0.  They'll face Normoss Newton Arms FC who saw off a second half fightback from Hampton Social to win 3-2.  The other semi final will take place between Devonshire Arms and Clifton Rangers.  The Devonshire beat Northern Rags 2-1 whilst Clifton Rangers won 7-0 against Kirkham Con Club.

In the Premier Division, Poulton won 14-1 away at Blackpool Catholic Club.  In the only other tie Molloys drew 2-2 with Bloomfield Vets.  The Golden Eagle are back on top of Division 1 tonight following their 4-0 win against CTK FC.  Second placed Wrea Green were beaten 4-3 by Blackhurst Budd.  Sportsworld Media fought back from 3-1 down to beat Northern Care Colts 5-3.  The Saddle did well to beat the Boars Head 4-1 and Chris Allen Garages won 2-0 against AFC Bloomfield.

Teamsport 90's time at the top of Division 2 lasted only seven days as Fylde Coast Gates finally returned to winning ways with a 6-2 victory against No4 Celtic.  FC Rangers are sliding down the table and this morning they lost 5-3 at home to Marton Institute.  Station Tavern beat Uncle Tom's 4-2 and AFC Wilo and Mereside finished at 4-4.  Only one game in Division 3 this morning saw Frenchman's Cove climb to sixth thanks to a 5-1 win against the Old England.

In Division 4, Score FC put daylight between them and the leading pack as their 7-3 win against Fylde Coast Gates took them three points clear of Pump & Truncheon who went down 4-3 away at FC Victoria.  Wesham Town are still in contention after beating Layton 5-3.  The rest are now in a battle for fifth place.  The Duttons lost 5-1 to Fire & Ice whilst Walkabout beat the Highlands by the same scoreline.  DH Gas beat strugglers JJ Property Services 3-1.

Important! – Two important midweek semi finals taking place in the next few days. On Wednesday evening (7-30pm) – Northern Rags play Sportsworld Media in the first of the Gledhill Cup semi finals at AFC Blackpool's ground.  The night after sees the first of the Lancashire Sunday Trophy semi finals as Reform Health Club take on Preston side Plungington Celtic at the ground of Bamber Bridge FC (7-30pm KO).  Try and get out to see these games. 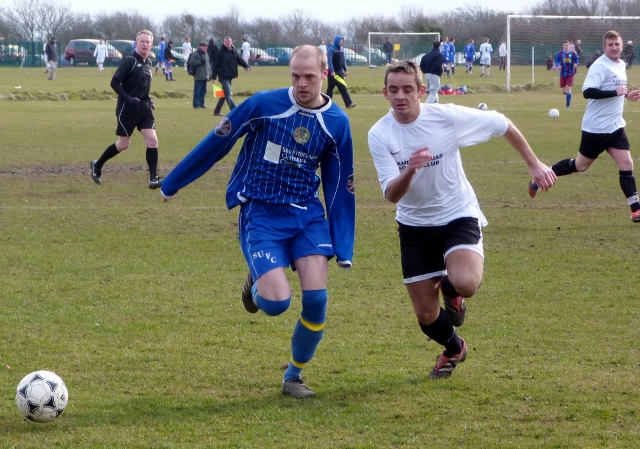 Action from Commonedge Road where Hampton Social FC were playing fellow Division 3 side Normoss Newton Arms FC (Blue) in the quarter final of the Division 2/3 Cup.  More pictures below; 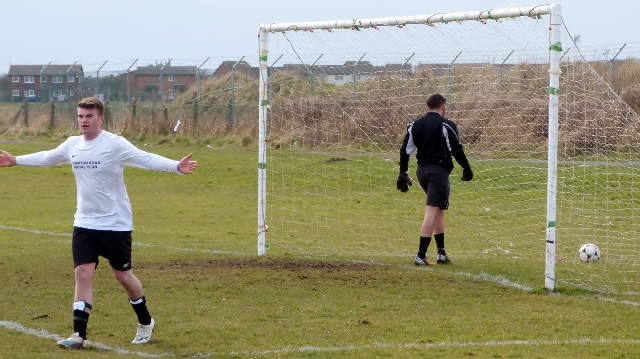 It wasn't long until Normoss sprung the offside trap and took the lead. 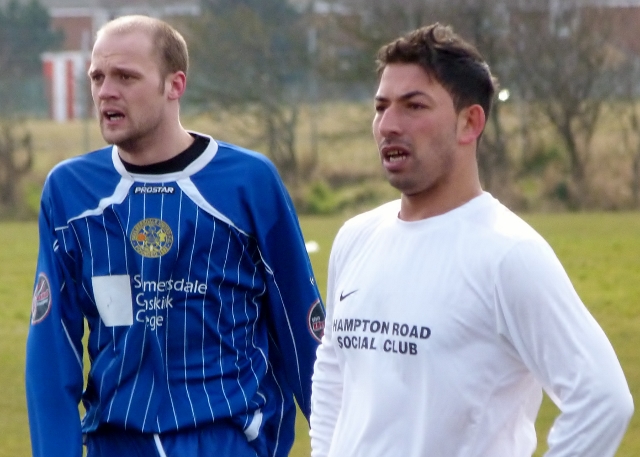 Referee Peter Sutton in charge of this encounter 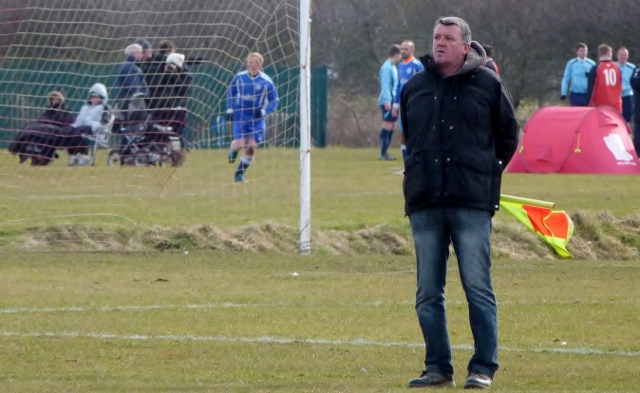 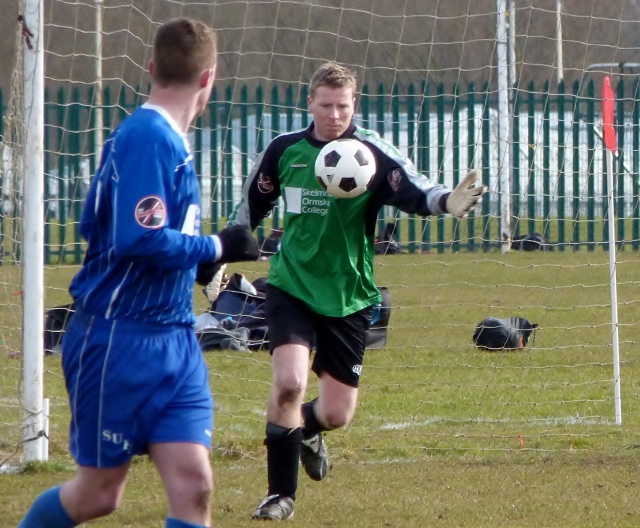 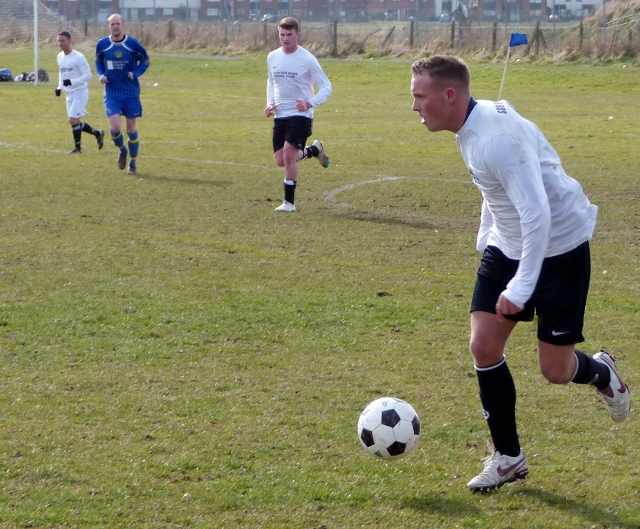 A hopeful claim for a penalty 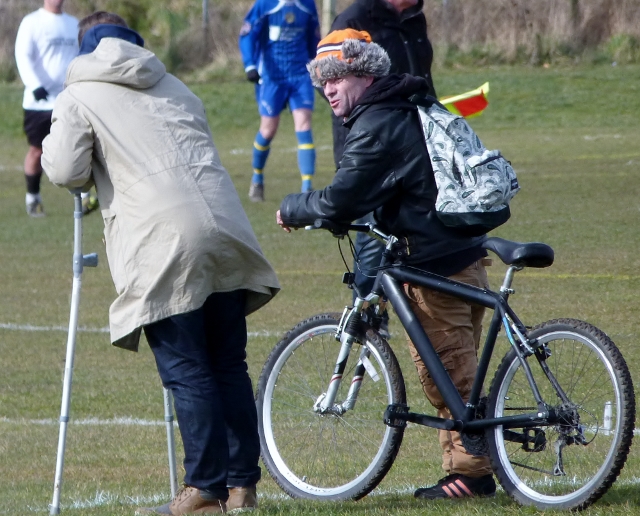 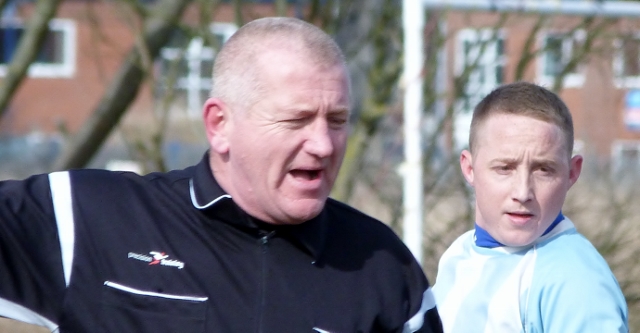 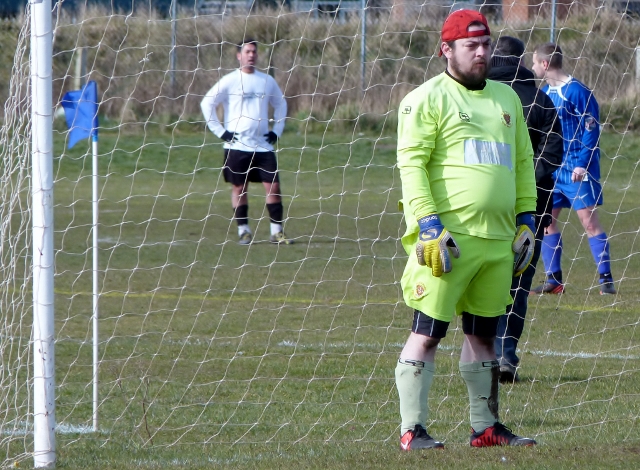 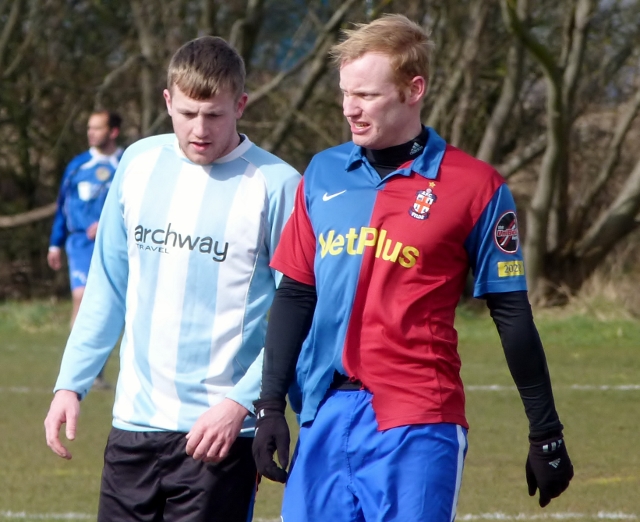 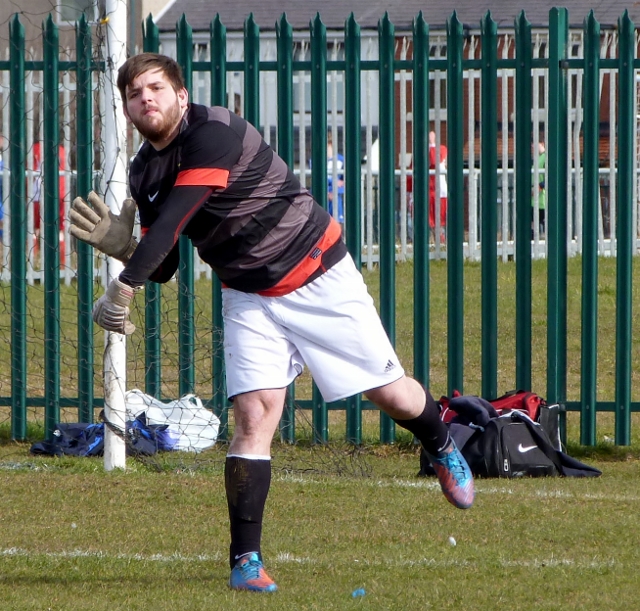 Jack Clarke in goal for Kirkham this morning 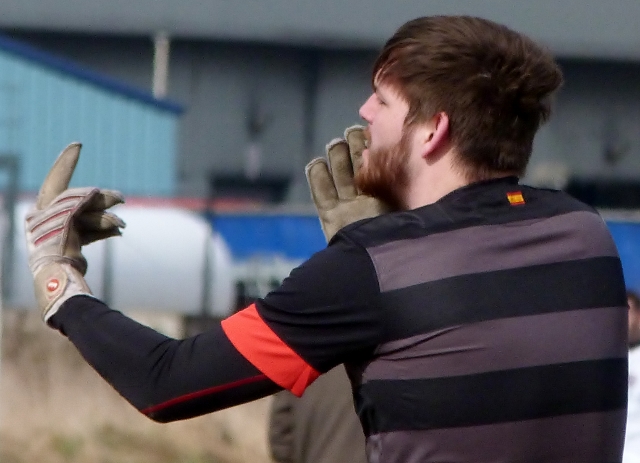 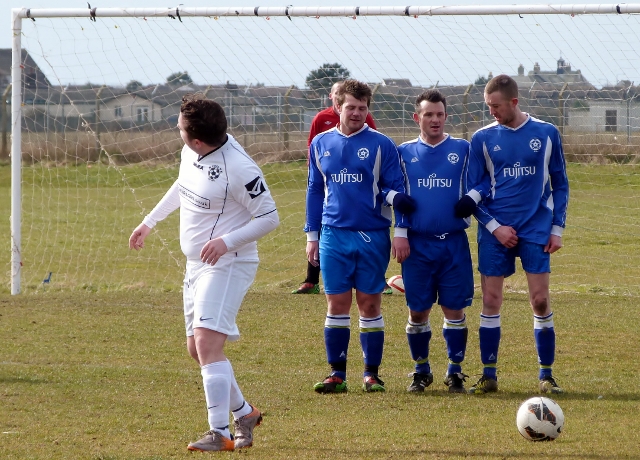 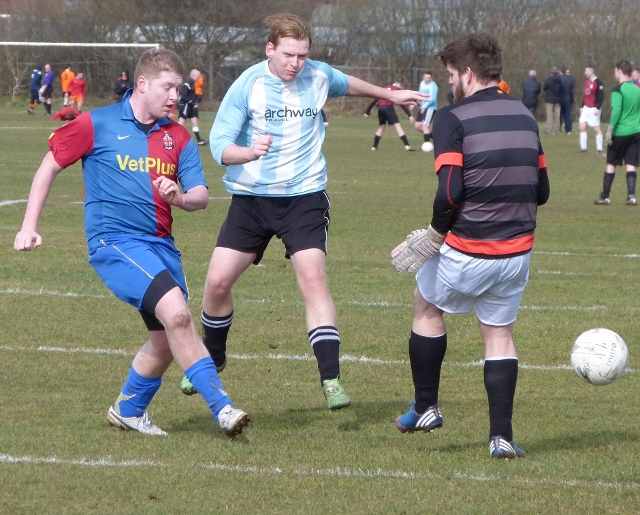 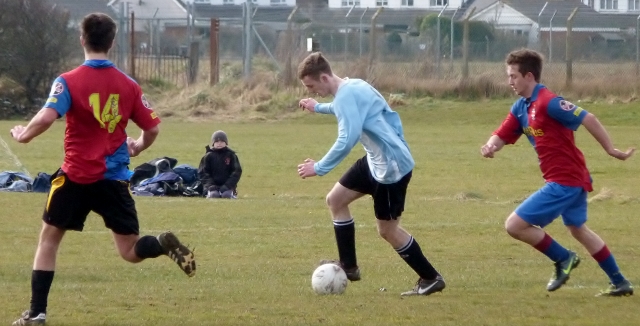 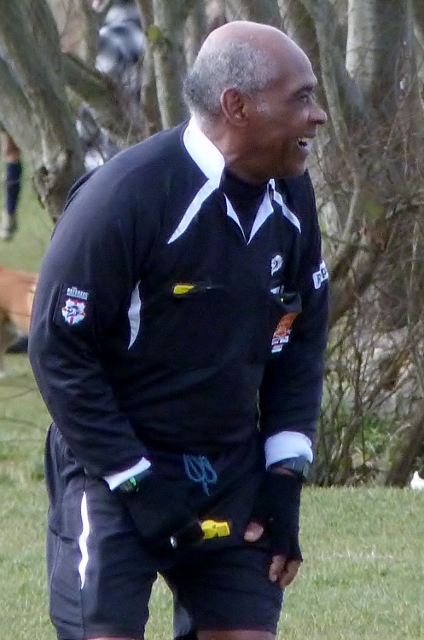 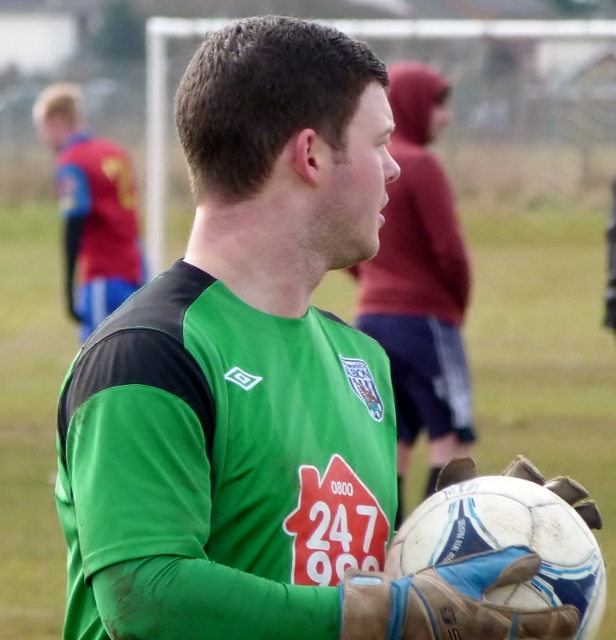 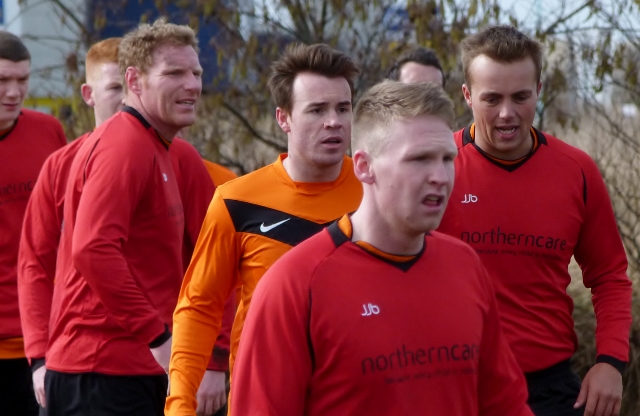 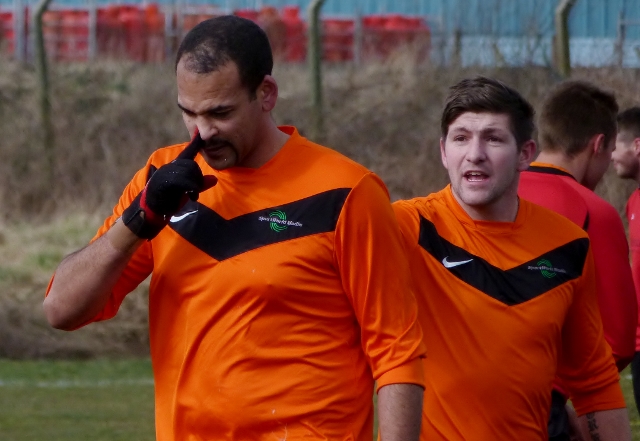 Helluva nostril clearance.  The missus hates that when they do it on the TV 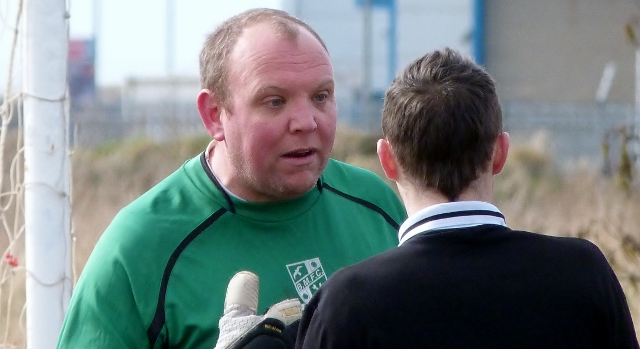 Northern player manager Matt Livingstone in conversation with the referee 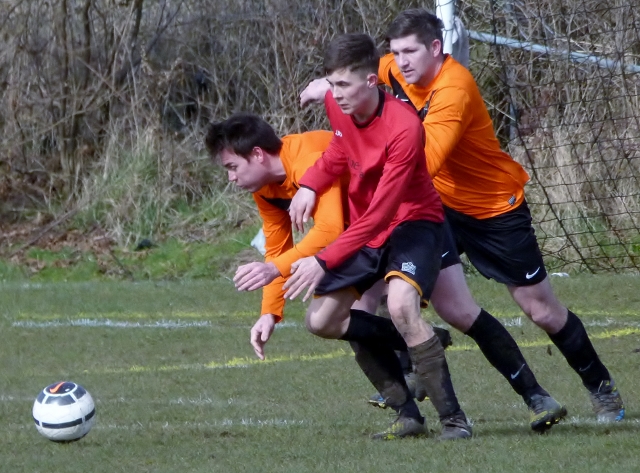 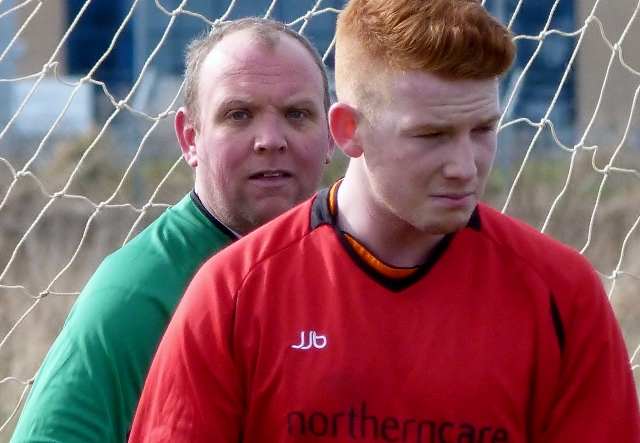 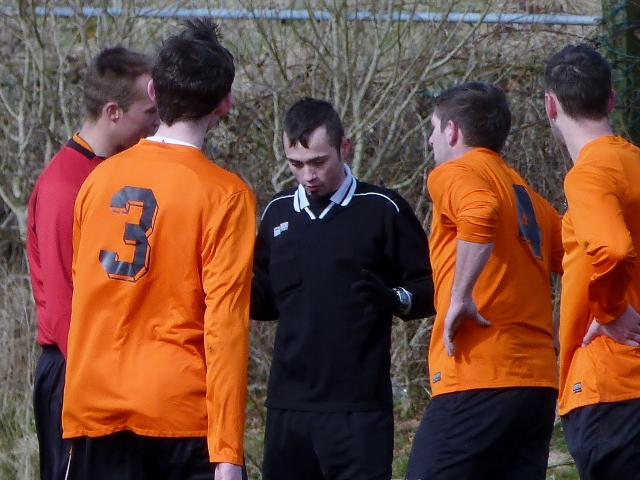 'Let's all cool things down a little' 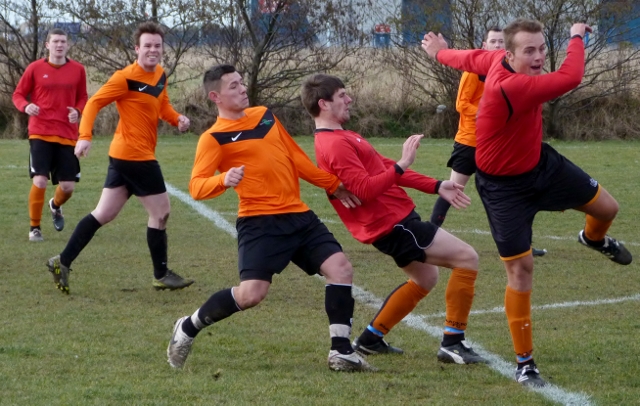 Half time…that was enough for me.  Bitterly cold Easterly wind on the Edge this morning.  Fingers crossed that was the end of the winter for Sunday football