This morning witnessed the 2nd round of the Prem/Div 1 Cup.  In the two inter Divisional games Division 1 ruled as Northern Care Colts smashed Molloys 5-0 and Mythop Leisure beat Bloomfield Vets 4-2.  There are not many Prem sides left in but Reform Health edged out Wrea Green 2-1 on a sticky pitch whilst Additions beat the Catholic Club 4-1.  Boars Head played well in their comprehensive 6-2 win against Golden Eagle.  There were also wins for Blackhurst Budd and Sportsworld Media.  In the Prem, Poulton pulled within a point of AFC Additions after beating Revival Tattoos 3-1.  The only game in Division 1 saw Bathroom Solutions beat 21st Century Windows 2-1 to go third.  Division 2 leaders Fylde Coast Gates drew 2-2 with third placed FC Rangers whilst second placed Devonshire Arms won 6-2 away at Uncle Tom's Cabin.  Division 2 is shaping up for an exciting second half of the season with many teams still hoping for promotion.  Highfield Social beat Blue Room whilst marton Institute enjoyed a big away win at No4 Celtic.  Teamsport won away at Wilo whilst Hansom Cab held Northern Rags to a 2-2 draw.  In Division 3, Kingsfield's 6-0 away win at Old England extended their lead at the top of the table ahead of Normoss Newton who were without a game.  Bispham Hotel thrashed Metrostars 7-0 to stay in third ahead of Wesham who won 4-1 away at Hampton Social.  The top two both won again in Division 4 and now look unstoppable in the race for the top two places.  Leaders Pump & Truncheom won 3-1 away at Walkabout FC whilst Score beat Highlands 8-2 away.  Victoria beat Fire & Ice and DH Gas beat Layton whilst Marton and Duttons played out a 2-2 draw.

Action from Commonedge Road where Boars Head FC (Barcelona strip) were hosting fellow Division 1 side Golden Eagle FC in the Prem/Division 1 Cup 2nd Round.  In the above picture, the nippy Boars Head player (15) dinks it over the head of Eagle keeper Steve Morrell before going on to slot it home.  Morrell didn't even look back at the obvious but instead rightly berated his defenders. 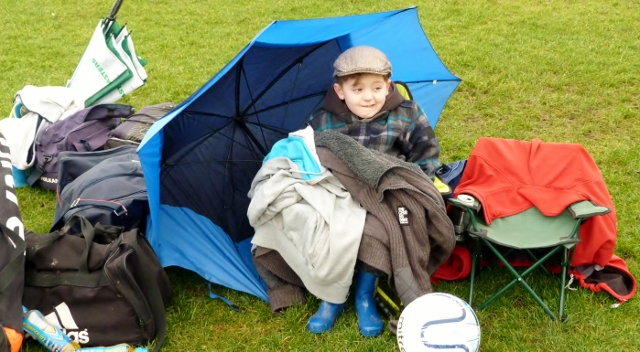 Sunday football returned for most of us across the Fylde Coast this morning but it was still cold on the Edge with supporters of all ages having to get wrapped up against the elements.  Poor quality pictures this morning due to the gloom.

Premier/Division 1 Cup action between Boars Head and Golden Eagle (Yellow).  Despite good early chances the Eagle failed to capitalise and they paid the price as the Boars raced into a 3-0 lead.

A good tackle by the Boars' keeper 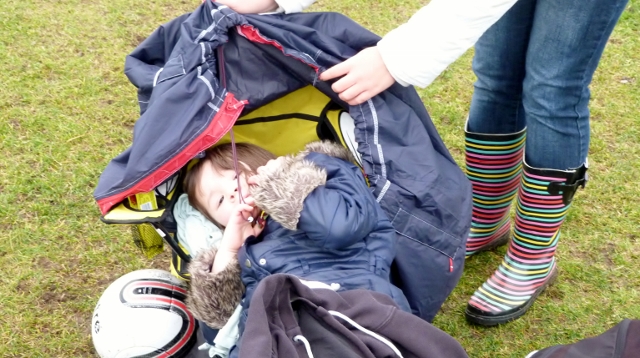 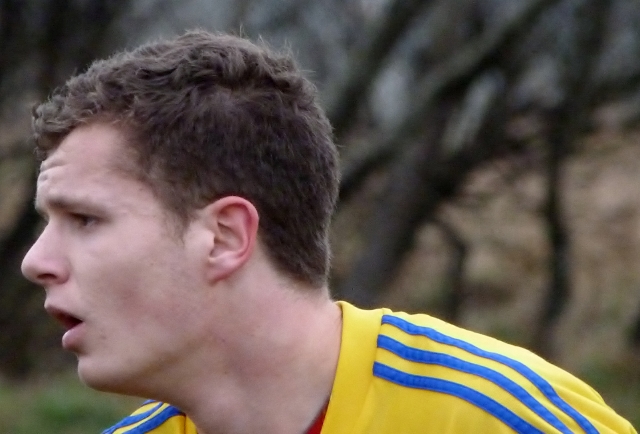 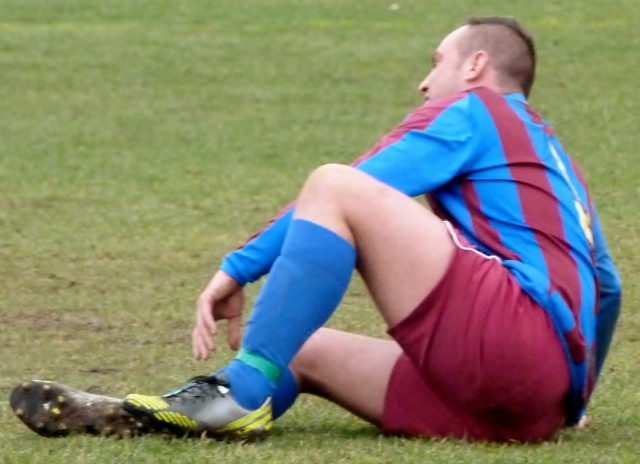 The ball breaks loose along the Eagle six yard line.  Anyone there to finsh it off? 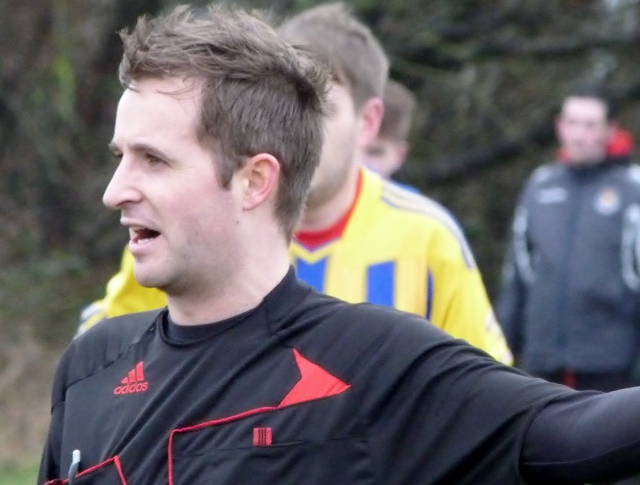 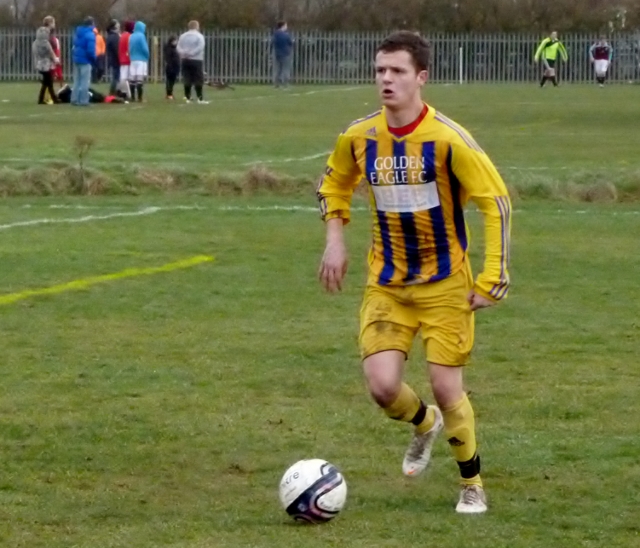 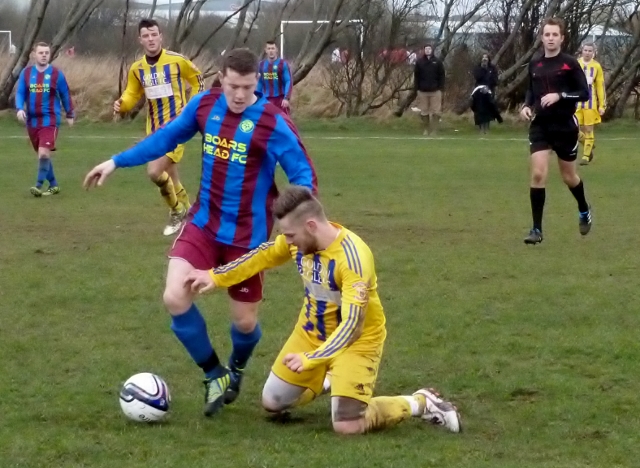 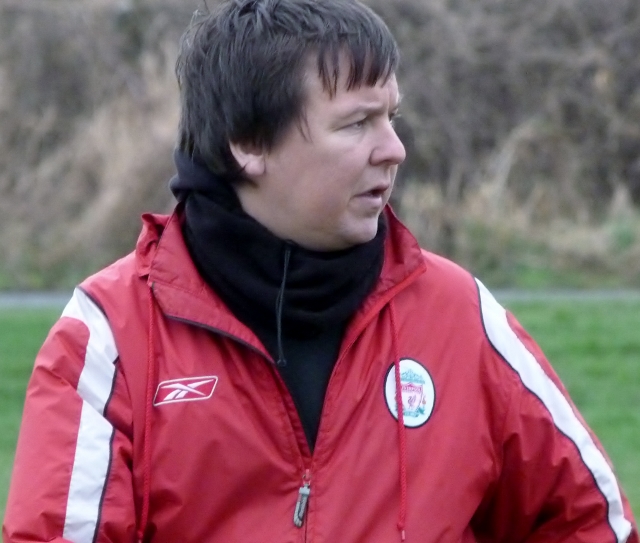 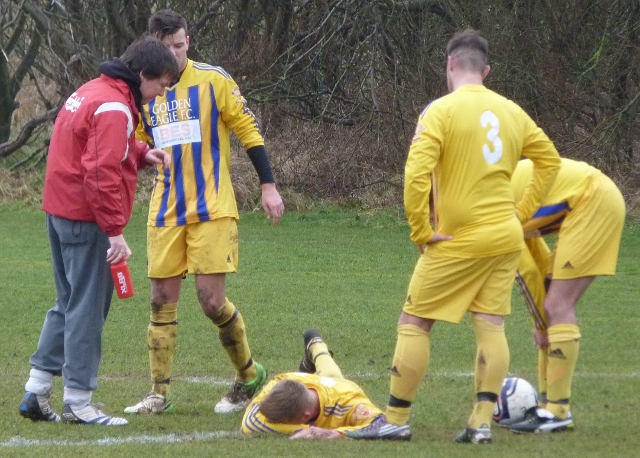 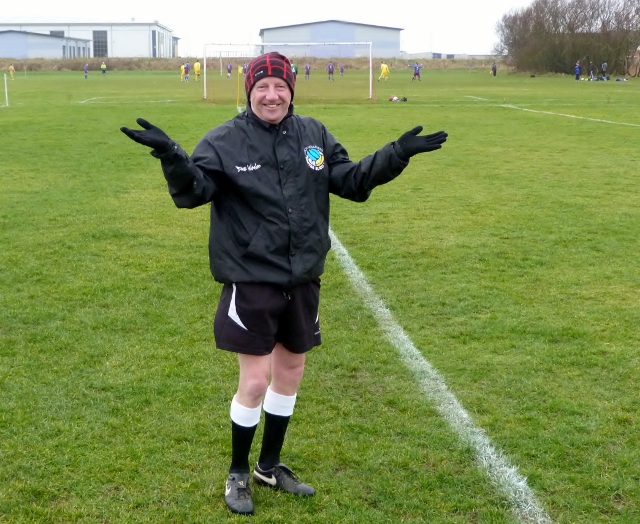 Three weeks ago, referee Dale Harvey was a spare part due to a communication breakdown and today misfortune struck again as he was the only official left without a game due to the non appearance of H&A Social FC who also left the JJ Property Services left standing with no opposition. 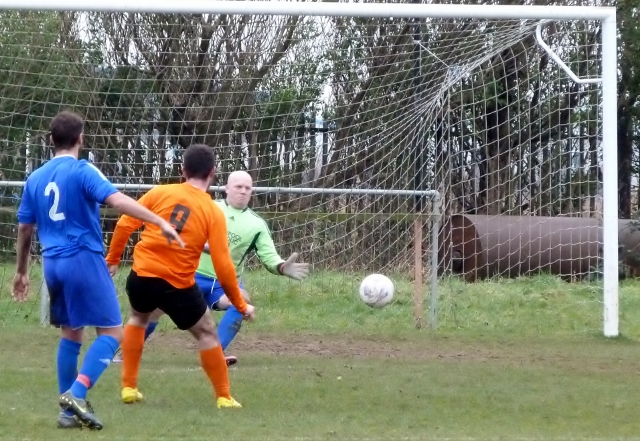 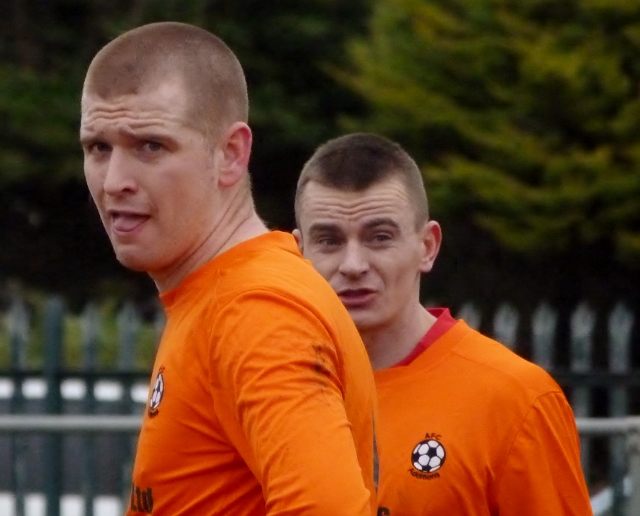 Sean Slater (Right) at the interval 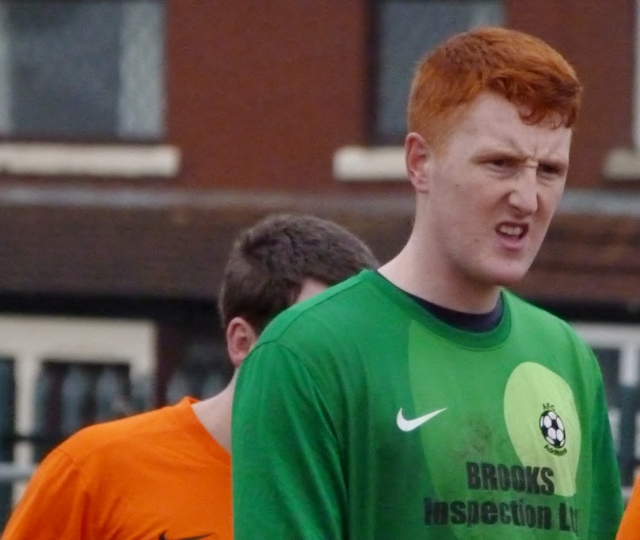 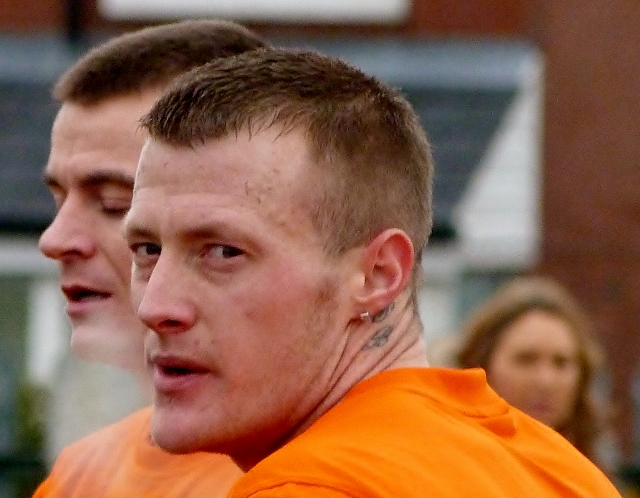 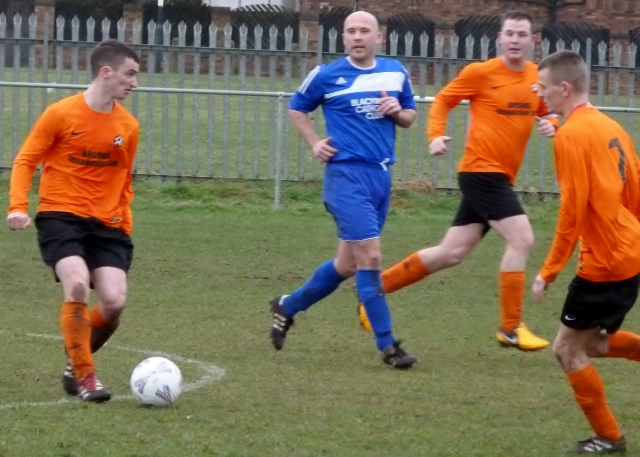 Danny Rossie (Centre) who rolled back the years to Little Fat Jacks FC days when he glanced home a consolation header from a corner midway through the second half. 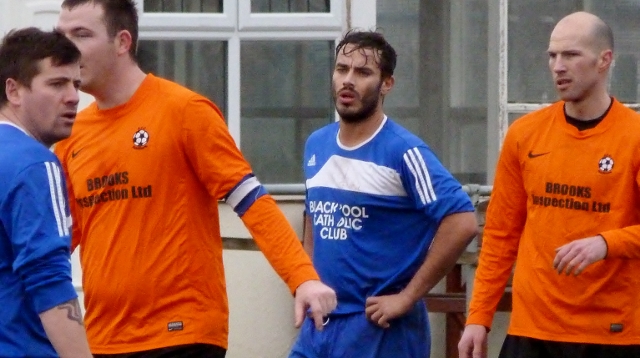 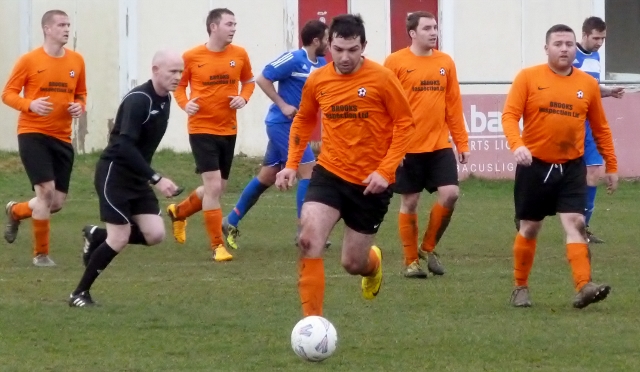 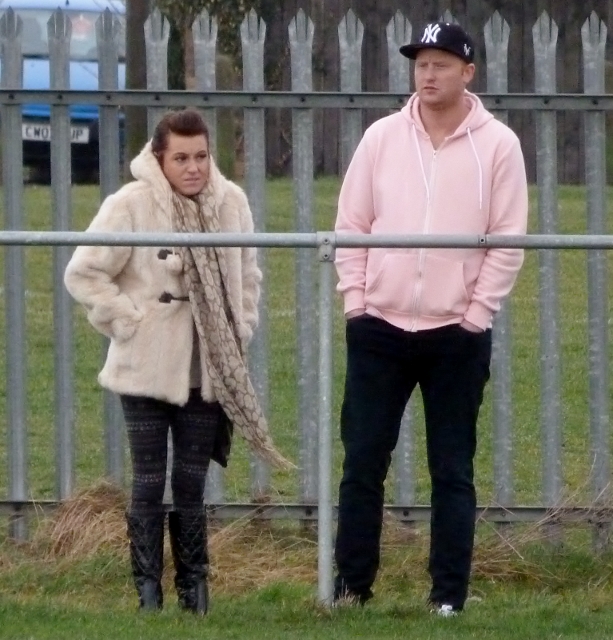 Big Bryn not playing at the moment) 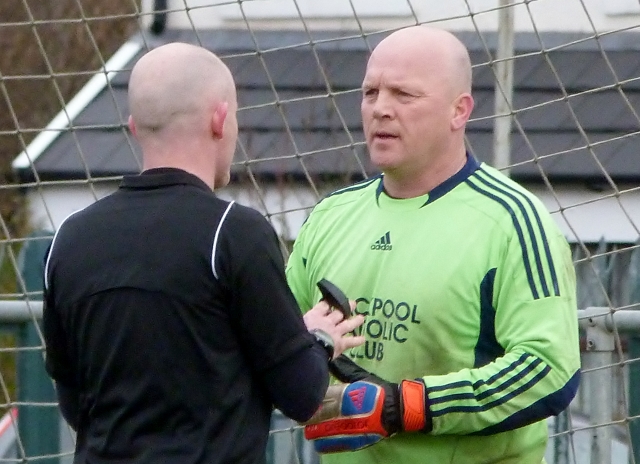 The referee has a long chat with Catholic keeper Cookie 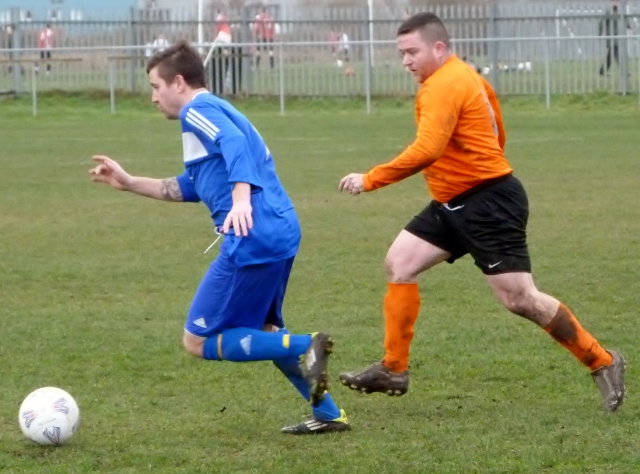 Mushy was down and out for a while 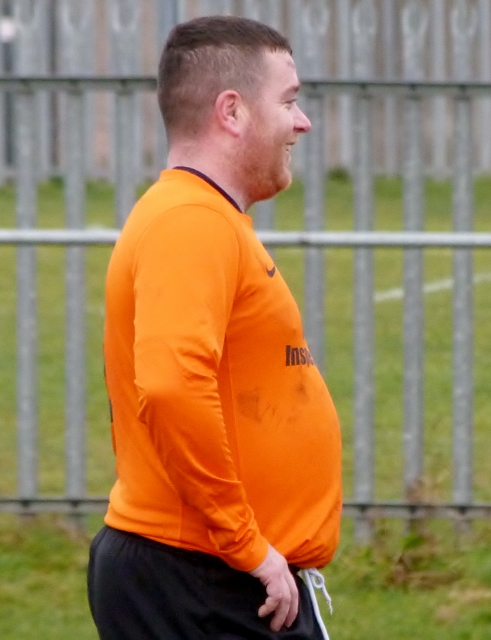 I think he'es losing a bit but Easter's on the horizon