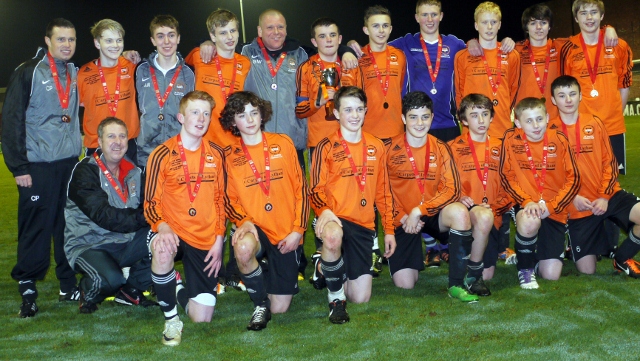 St Annes YMCA Under 15s completed an amazing hat tick of County Cup successes with this nail-biting victory at the Lancs FA's County Ground in Leyland.

The team managed by Carl Pomfret and assistants Martin Rowley and Graham Waterhouse continue to write their name in the record books.

After winning the competition the two previous seasons at Under 13s and 14s this YMCA team created history by being the first team in Lancashire ever to reach and win three County Cups in successive seasons.

In perfect conditions and on an excellent pitch YMCA settled early and it was no surprise when they took the lead through Jamie Thomas 15 minutes in to the game after an accurate cross from full back Johnny Airey.  Despite St Helens looking happy to try and contain YMCA, they did come more into the game but 2 minutes before the break YMCA doubled their lead. Thomas grabbing his 2nd goal after good work down the right by James Carty.

YMCA looked comfortable taking a 2-0 lead into half time but St Helens displayed much more determination immediately after the restart which led to them pulling a goal back. YMCA responded well though and with full back Airey, who was outstanding today and full of confidence and energy, his bursting run and cross led to YMCA restoring their 2-goal lead with a strike by Aidan Atchison. Victory for YMCA then seemed a formality but St Helens continued to display great spirit and they netted again to make it 3-2. This seemed to stun YMCA and their general play became a little ragged for the next 15 minutes.

Their earlier composure evaporated as St Helens began to take the upper hand and their relentless pressure led to them levelling the tie at 3-3.However YMCA began to regain their rhythm in the closing stages and were finishing the game strongly. The scores still remained level though and a penalty shootout to decide the issue looked on the cards.

However, with just 30 seconds remaining Atchison latched on to a through ball and burst through into the area and found the bottom corner of the net with a superb low drive to clinch the trophy for YMCA and break the hearts of their spirited opponents. It must be said that all of St Helens goals were outstanding in this game, their fight and determination was there from the start and YMCA more than met their match in what will go down as probably one of the best finals to ever be seen at Leyland County Ground.

As it is though YMCA will go down in the history books with this remarkable achievement, as they once again for the third year running have proved they are the best team in Lancashire at this age group.  Elliot Dickson was outstanding throughout in the YMCA defence, with Bradley Garner and Atchison also shining down the spine of this team.