Poulton SFC secure the last of this season's Gledhill Cup semi finals thanks to a 5-0 win against Teamsport 90 FC.  Blackpool Catholic Club FC reach Round 2 of the Prem/Division 1 Cup thanks to win  against Prem side FC Loco.  In the Premier Division Quilligans FC made it thirteen straight league wins after beating Christ the King to stay top. Gardeners are still chasing hard and picked up three more points against Great Eccleston.  It looks as though the top two places are now decided.  Village Steel FC returned to action and beat Blackpool Motor Works 3-2 to go top of Division 1.  Golden Eagle FC are second after they won 5-1 against C&G Electrical.  21st Century Windows FC came out on top in the Division 2 game of the day as they won 3-2 away at Boars Head FC in a highly entertaining fixture.  The Stable Bar are also going well, they're in third after winning 3-1 away at the Squirrel.  Division 3 leaders Xceptional Kitchens FC were without a game but their rivals maintained the pressure as FC Kingsfield and Number Four Celtic FC both recorded victories.  Division 4 leaders Thatched FC were also without a game and they'll be pleased to see that rivals FC Newton and Blue Room FC played out an exciting 3-3 draw.

Action from pitch 7 at Commonedge Road where Bathroom Solutions FC were at home to the County FC (Red).  As per usual, Bathroom were having the lion's share of offensive possession but couldn't make it count.  In this video they were denied from a free kick due to the agility of the new slimline 'Tank' Sharples.

A big game at the top of Division 4 between Newton Arms FC and the Blue Room FC (Blue) – poor conditions for photo's this morning. 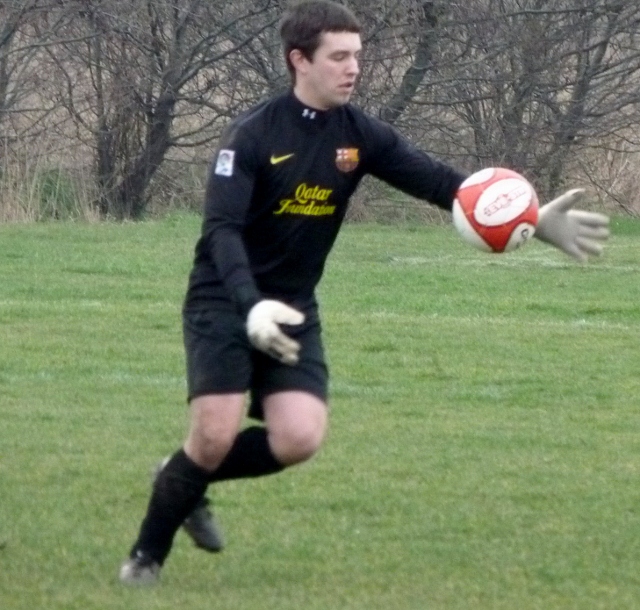 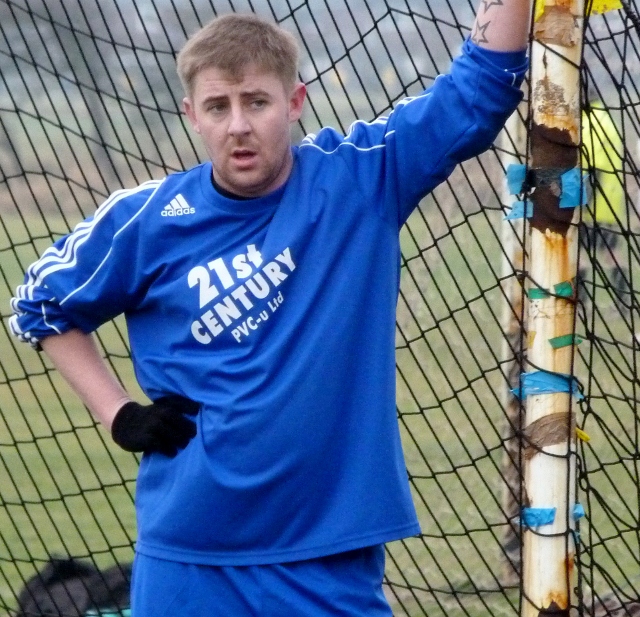 Another big game next door between Boars Head FC and the Wipers (21st Century Windows FC).  A great match this one at the top of Division 2. 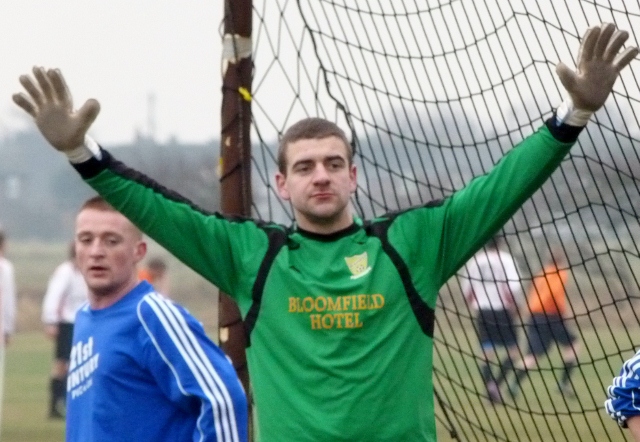 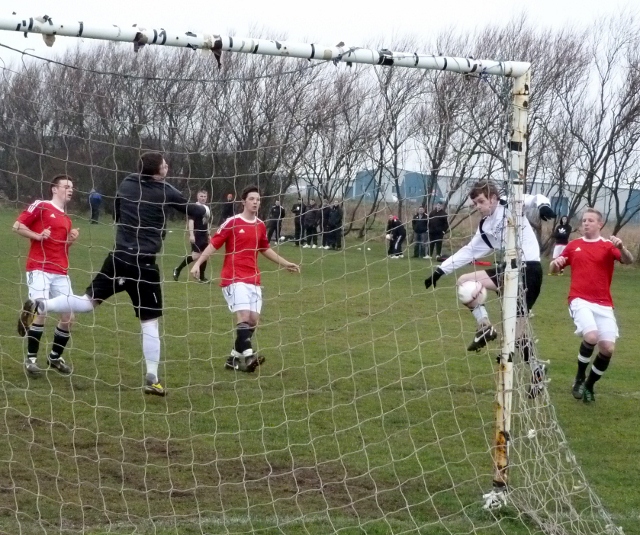 Over the dyke and it was Division 1 action between Bathroom Solutions FC and the County FC (Red).  Mickey Evans goes close at the far post after the keeper flapped at it but the faintest deflection was enough to put Evans off. 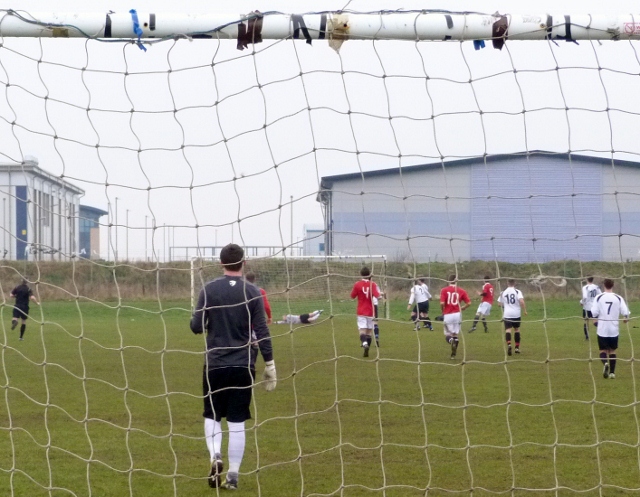 And not long afterwards, the County broke upfield to take the lead through Rick Sear (9).

The Boars Head score but it was chalked off for offside. 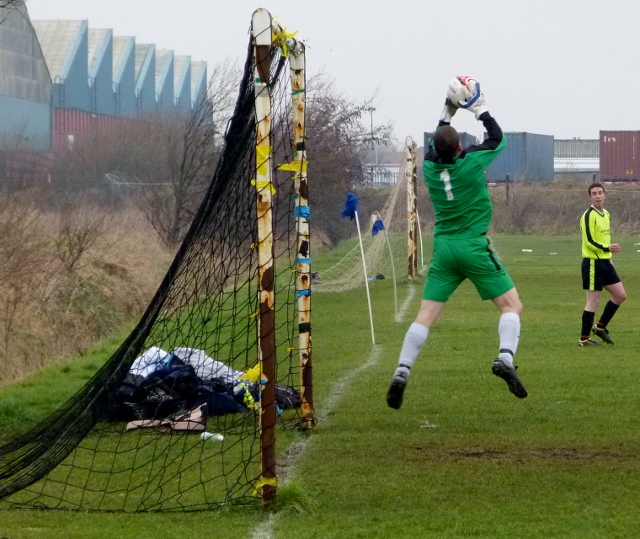 A good catch from the Window's keeper 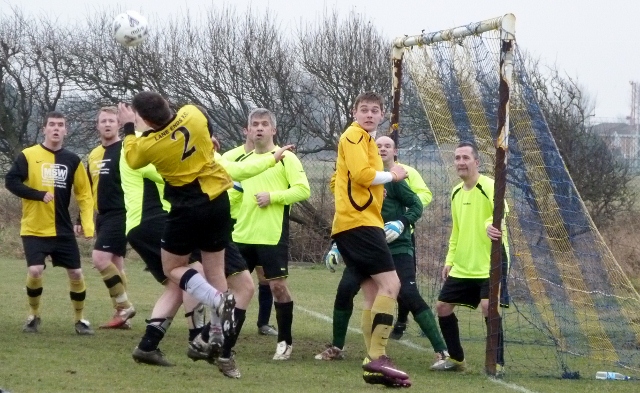 Lane Ends FC away at Old England FC  on pitch 1 at Commonedge.  Old England in the luminous kit 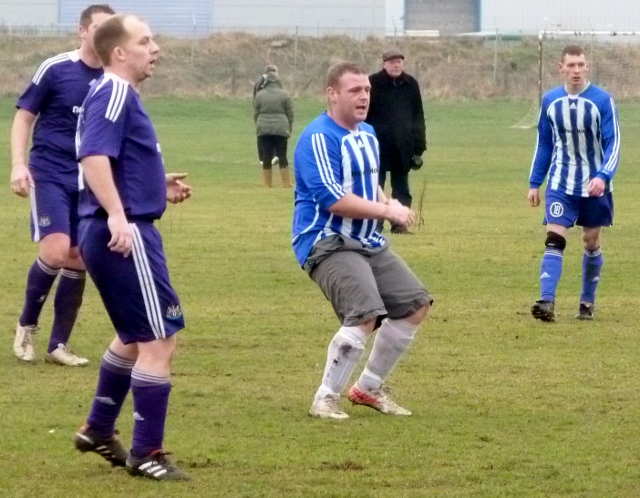 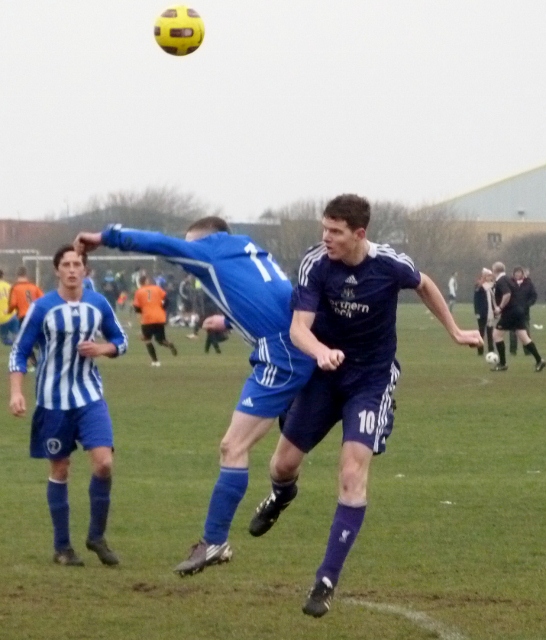 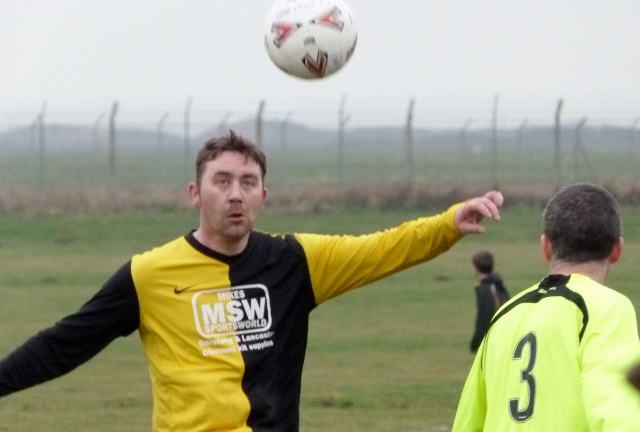 Dave Bamber keeps his eye on the ball for Lane Ends 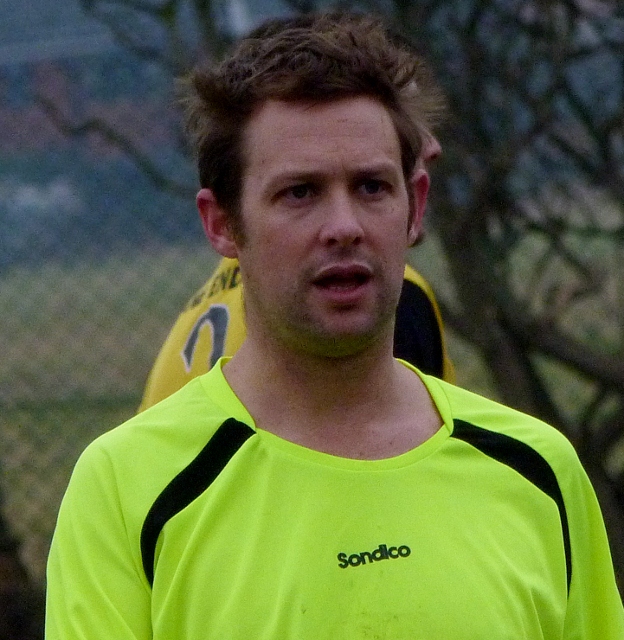 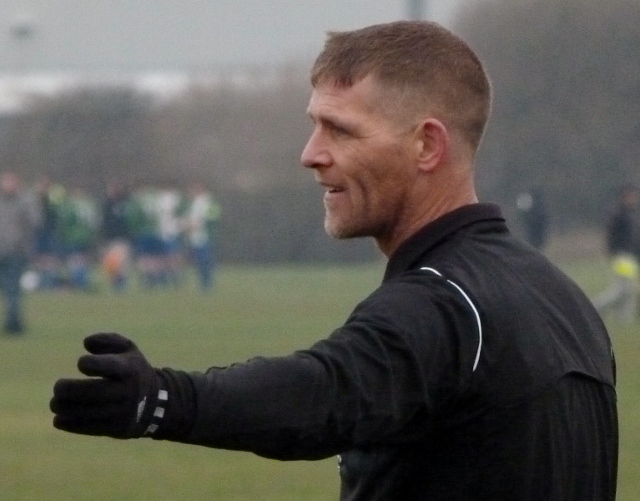 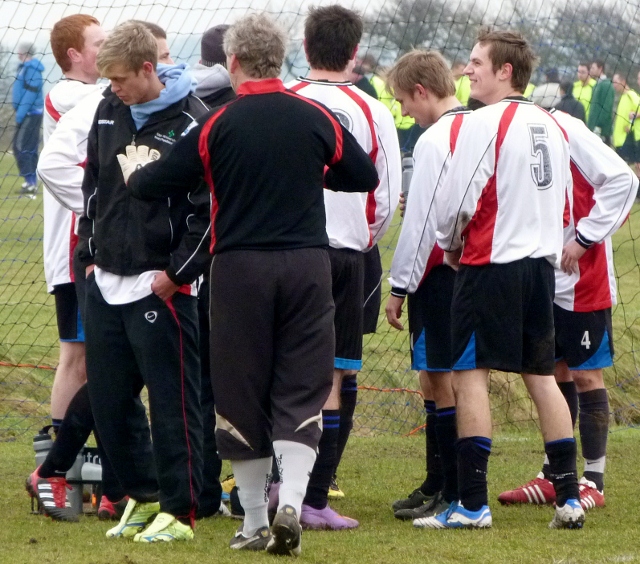 Back to the Bathroom v County game 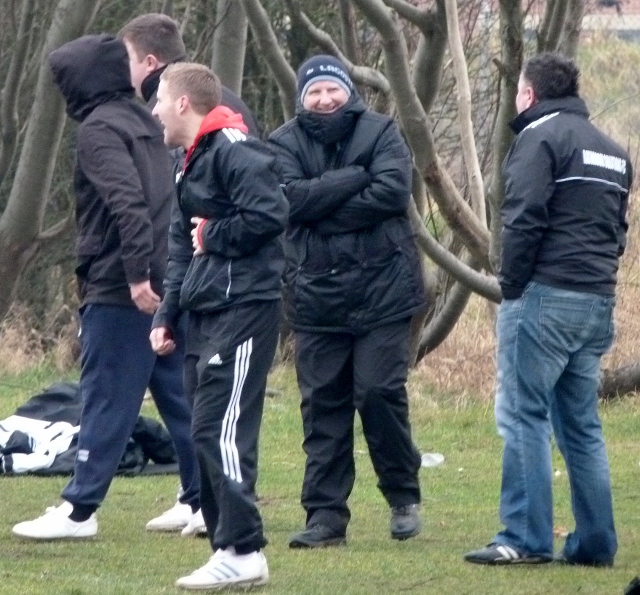 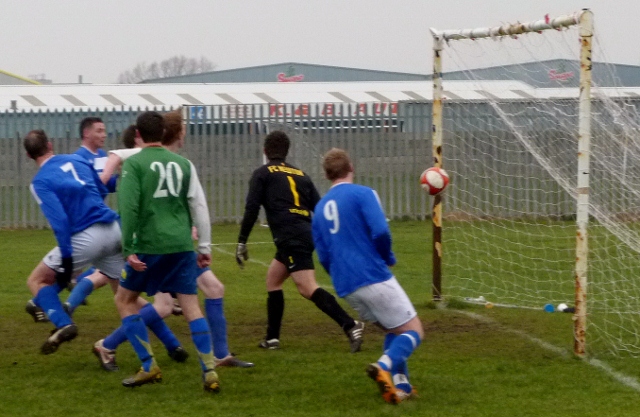 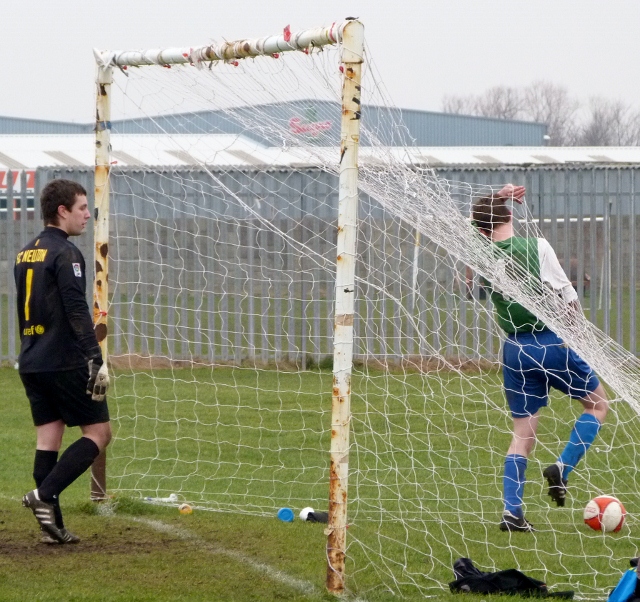 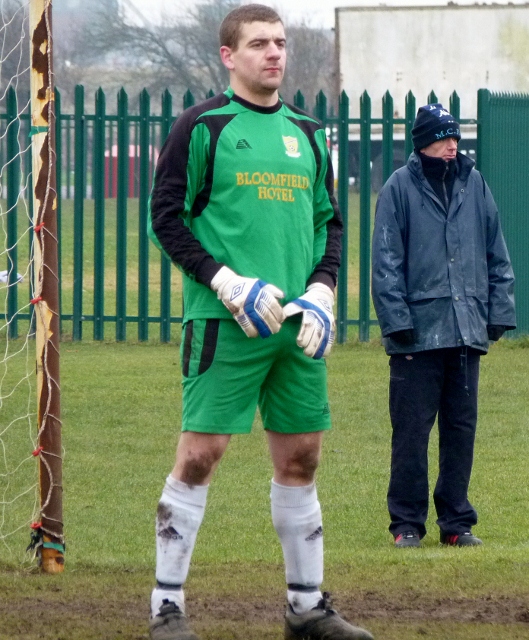 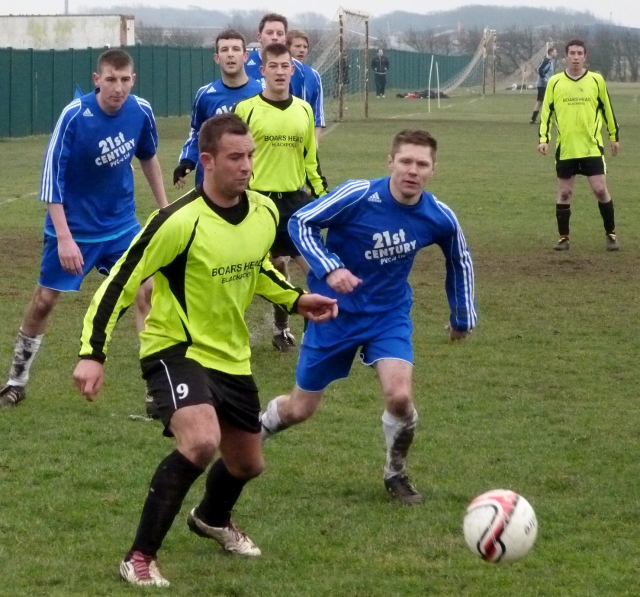