What a game of football between the two best sides in Lancashire. This was a great advertisement for junior football and also for the Blackpool and District Youth League.   Everyone that showed up to support this game was given a footballing treat as both sides fought from the moment the game kicked off until the last penalty kick. It shows the class of these two sides and how evenly matched they are that the game couldn't be won within the 70 minutes of playing time.

Unfortunately for one of the teams there had to be a winner and after 70 minutes playing time and 16 penalty kicks in a nail biting shoot out it was Lytham St Annes YMCA who came out on top to retain their Lancashire Cup Title. The YMCA have become the first team in history to claim back to back Lancashire Cup titles.With the YMCA having won the County Cup the previous year many would have probably thought that the nerves wouldn't get to the players as much, but in the first half the players seemed nervous and some what overawed by the occasion and their fluency and style of play that had helped them to reach the final was not really there to see.

South Shore had the measure of the YMCA in the first half but were met by the solid defending of James Rowley, Cameron Stubbs, Bradley Garner and Johnny Airey and also the outstanding keeping of James Lawrance. Oliver Moore played one of his best games in an orange shirt in the centre of midfield with James Carty also causing the Shore right back numerous problems as he attacked with power and pace down the left hand side in the first half. Aidan Atchison and Jack Crawford linked up well on a couple of occasions, as did Russell Townsend and Johhny Airey, but were met by the resolute defending of their opponents.

With neither team managing to break the deadlock the players went in at half time with the scoreline 0-0. In the second half YMCAs momentum and team spirit increased significantly from the first half and they really took the game to South Shore. YMCA had large amounts of possession and played the better football. They closed Shore down quickly and won their 50-50 battles, this restricted Shore to the long ball to their dangerous striker, but again this was met with solid defending. On the two occasions that their striker did get in behind the back line he was denied by two superb saves by James Lawrance.

The introduction of Jordan Willder and James Naylor at half time seemed pivitol in changing the game, Willder caused numerous problems with his pace and trickery whilst Naylor chased everything down and added that extra support up front for Aidan Atchison. Captain Carl Kennedy was also instrumental in helping turn the game around, after a quiet first half by his standards, his second half performance was there for all to see. His sheer power, pace and drive could not be coped with by Shore and Kennedy and Moore took control of the midfield for the rest of the game.

With YMCA applying all of the pressure it was somewhat unfortunate that against the run of play South Shore took the lead through Stevie Higgins after YMCA had failed to clear a corner. The team spirit though in this YMCA team would be hard to match by any other team in any sport. They work hard for each other, fight for each other and know that they can overcome any obstacle that is put in front of them. As they continued to dominate the play Atchison and Naylor both had efforts cleared off the line, Kennedy and Willder pulled shots wide, Moore and Carty had goalbound shots blocked and Kennedy also hit the bar after a stong run.

The breakthrough came when Naylor was sent through and as he knocked the ball round the advancing keeper he was felled and after having a penalty claim turned down in the first half the referee had no hesitation in pointing to the spot. Up stepped man of the moment Johnny Airey. His composure in such a situation should be admired as he placed the ball in to the bottom right hand corner levelling the scores on the evening. As YMCA continued to press there wasnt enough time for them to find a second to seal the game as Shore held on, sending the game in to penalties.

Penalties is not a great way to win and is an even worse way to lose, but this was going to be the only thing that could split the top two sides in Lancashire and probably further a-field.  South Shore took the first penalty which was blazed over, Johnny Airey then scored, Shores second went wide, Jordan Willder scored. James Lawrance saved Shores third and with three penalties of the 5 remaining for YMCA and only needing to score one, many will have thought YMCA had one hand on the cup. This wasnt the case as Cameron Stubbs, Aiden Atchison and Oli Moore all saw their efforts go high or wide. Shore scored their remaining two penalties to send the shoot out in to sudden death.

Shore scored, James Lawrance scored, Shore Scored, Carl Kennedy Score, Shore missed after a superb save by Lawrance. Up stepped Bradley Garner a player with a massive heart, a player that has been with and loved this club since the age of 6, a player that is playing at the top of his game and having his best season for YM, he fired the ball in to the bottom left hand corner before setting off on his celebratory run with all the YMCA players and management in tow, before the wild celebrations began in the middle of the pitch.As the players shook hands shortly after, the admiration for two top sides was applauded by the following fans.

When YMCA last year won the Lancashire Cup, Northern England Cup and became National runners up, many thought this was a 'fluke'. The players, parents and management team of the YMCA knew this was not the case, and set out at the beginning of this season to retain their prestigous County title. Once again they have proved they are the best team in Lancashire, but not without having to overcome a team, so close to home who have been their arch rivals for many years.

Congratulations to both teams for reaching the final and producing a game of football that had everything. It is also fitting that around half of the players that were on show in this final, will return to the County Ground at Leyland on Thursday 28th April for the Inter League Cup Final. On tonights displays it will take some team to come and beat the Blackpool and Fylde Side. Good Luck in this game lads. 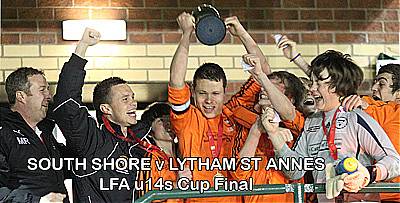